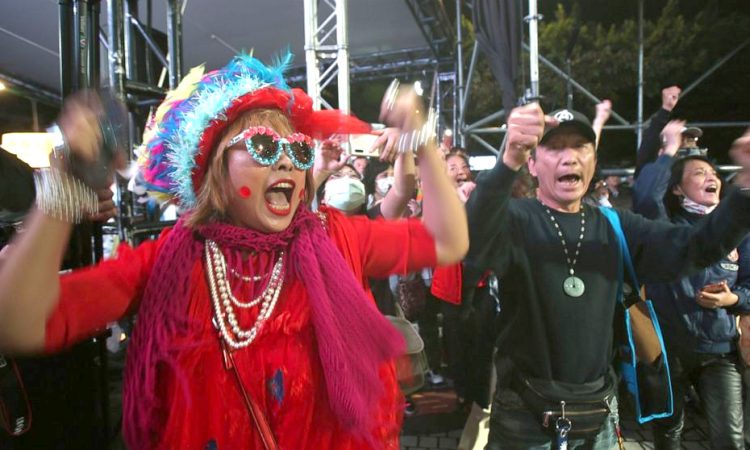 Taipei, December 12: Employees and supporters rallied for a Taiwanese pro-China cable news channel as it was taken off air Saturday, after the government refused to renew its license, citing accuracy issues.
CTiTV’s channel 52 broadcast a countdown and then went black after midnight. The cable network, whose non-news channels were not affected, plans to continue putting news on YouTube and other digital platforms.
A large crowd chanted “Hang on, CTiTV” and held up signs reading “Thank you CTiTV, we will see you again.” Employees, some tearing up, sang songs and swayed in unison wearing matching blue windbreakers.
Liao Chia-yu, a language teacher, said she would keep watching CTiTV on YouTube. “I also hope they don’t forget their ideals,” Liao said. “They should put out whatever they want, and report on the truth.”
The National Communications Commission cited repeated violations of rules on accurate reporting in rejecting the renewal last month. The station has been fined 25 times in the past six years for spreading inaccurate information.
The station is owned by the Want Want China Times media group, which also publishes one of Taiwan’s main newspapers. It has long been associated with a Beijing-friendly political view, attributed partly to its extensive business interests in China.
China regards democratic Taiwan as a breakaway province that is part of its territory and has been upping its threats to bring the island under control by force as economic and political enticements bear little fruit.
In its ruling, NCC Chairperson Chen Yaw-shyang made no specific allegations of a pro-China bias, but said the channel appeared susceptible to outside influence.
“The biggest problem is external interference into the TV station’s news production and broadcasts,” Chen said in announcing the denial of the renewal.
CTiTV appealed the denial unsuccessfully and accused the Taiwanese government of endangering media freedom.
Reporters without Borders, a media watchdog group, said in a statement that the decision did not go against press freedom, but expressed regret over its impact on the station’s staff.
CTiTV owner Tsai Eng-meng, addressing the crowd, said, “To each who support us, CTiTV, maybe after we soon switch to become a new media, there will be things that we need to improve. But I feel that we will slowly become better and better.” (PTI)