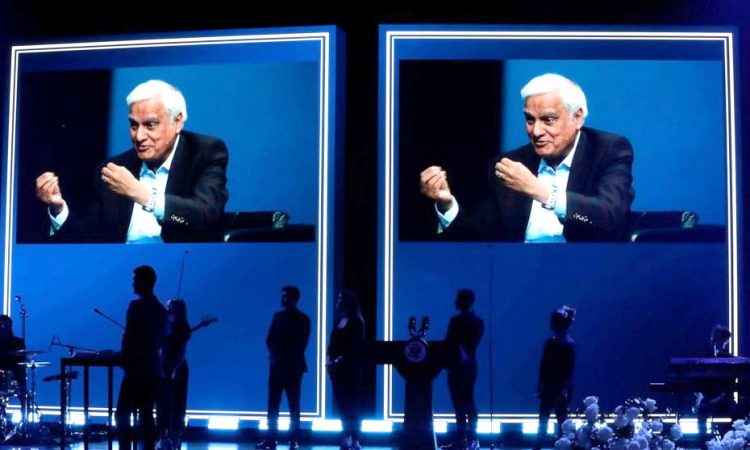 FILE - In this May 29, 2020 file photo, images of Ravi Zacharias are displayed in the Passion City Church during a memorial service for him in Atlanta. A law firm's investigators have released a scathing report on their four-month investigation of alleged sexual misconduct by Zacharias, who founded a global Christian ministry that bears his name. (AP Photo/Brynn Anderson, File)

New York, February 12: Ravi Zacharias, who died in May after a high-profile career leading a global Christian ministry, engaged in sexual misconduct with massage therapists and carried on many amorous extramarital relationships via text message and email, according to a scathing, in-depth report from a law firm hired by the ministry.

Five of the therapists said Zacharias touched them inappropriately, and one said she was raped, according to the report.
It said investigators searching India-born Zacharias’ mobile devices found more than 200 photographs of younger women, including nude images of a salon employee in Malaysia.
In blunt terms, the report by Atlanta-based Miller & Martin said Zacharias had lied in claiming in 2017 that I have never engaged in any inappropriate behaviour of any kind.
Coinciding with the report’s release on Thursday, the board of directors of Ravi Zacharias International Ministries issued a statement of corporate repentance.
The board apologised for earlier statements that belittled accusers and pledged steps to support victims, combat abuse and harassment, and reassess the management structure, which is overseen by Zacharias’ eldest daughter, ministry CEO Sarah Davis.
We are devastated by what the investigation has shown and are filled with sorrow for the women who were hurt by this terrible abuse, the board said.
Zacharias, who died of cancer at the age of 74, was a widely popular author and speaker, with many celebrities and prominent Christian leaders among his admirers. Then-Vice President Mike Pence spoke at his memorial service in May, lauding him as a great evangelist armed with intellect, girded with truth and love.
Zacharias founded his international ministry, known as RZIM, in 1984, with a mission to engage in Christian apologetics defending Christianity with powerful intellectual arguments. Based in suburban Atlanta, RZIM has operations in about 20 countries and a roster of scores of traveling speakers.
In recent months, the organisation has been plunged into crisis, precipitated by a Sept 29 article in the evangelical publication Christianity Today. The article asserted that over a period of about five years, Zacharias sexually harassed three women who worked as massage therapists at two day spas he co-owned in an Atlanta suburb. (AP)