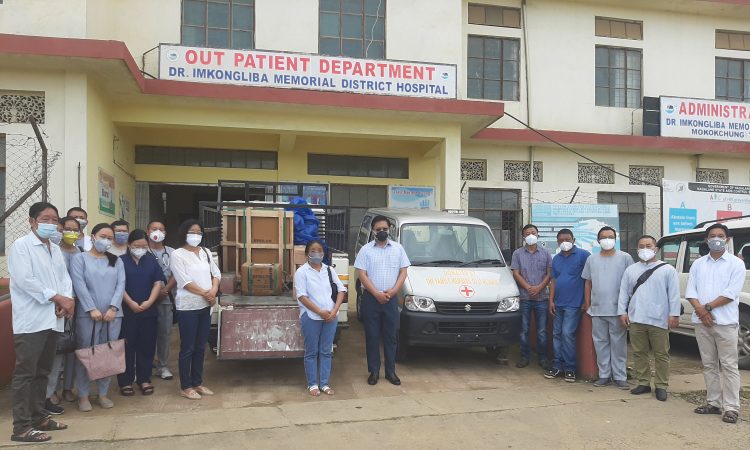 Mokokchung, July 21: In a noble gesture, the family of Late NI Jamir today donated an ambulance and a portable digital X-Ray machine to the COVID Hospital under IMDH, Mokokchung on Wednesday, which was formally accepted by Deputy Commissioner and DTF chairman, Limawabang Jamir in presence of Chief Medical Officer and other health officials.

While formally accepting the ambulance and the equipments at IMDH, the DC expressed appreciation to the family of Late NI Jamir for their philanthropic works. He said Late NI Jamir (former chief secretary and former cabinet minister) was one of the most prominent citizens in Nagaland. In this regard, he appreciated the family of Late NI Jamir for carrying out the legacy of the departed leader in the district through their noble works. He further added that the latest donations to the COVID hospital will greatly help in the battle against the virus in the district.
Medical Superintendent of IMDH, Dr Limatula Aier said that the ambulance and digital x-ray machine arrived at the right moment when the hospital was in dire need of such equipments. She asserted the ambulance and the x-ray machines would go a long way in helping the patients in the hospital and would greatly boost the morale of healthcare workers in the district.
Meanwhile, pastor of Mokokchung Town Baptist Church (MTBA) Yanglu Pongen dedicated the equipments and the ambulance while Chief Medical Officer Dr R. Chubala Aier chaired the programme.
(Page News Service)