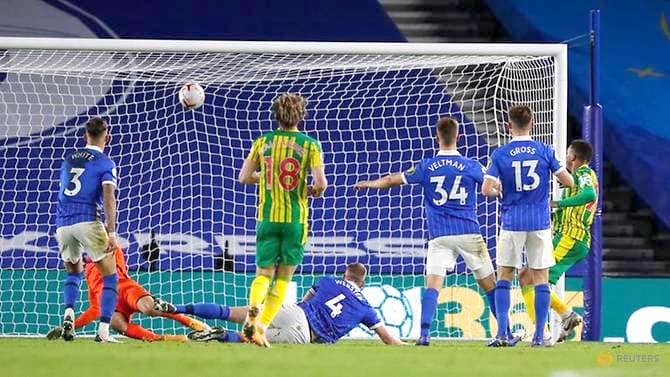 BRIGHTON, October 27: West Bromwich Albion salvaged a 1-1 draw at Brighton & Hove Albion in the Premier League on Monday after striker Karlan Grant scored his first goal for the Baggies to cancel out a first-half Jake Livermore own goal.
The result left both sides close to the relegation zone, with Brighton 16th on five points from six games and West Brom 17th on three points as their winless start continued.
West Brom could still drop into the bottom three by the end of the day if 18th-placed Burnley, who have one point from four games, beat Tottenham Hotspur at home in the late kick off.
Livermore was unfortunate to get on the score sheet at the wrong end in the 40th minute as a desperate clearance by team mate Branislav Ivanovic cannoned off the midfielder’s face into the back of the net after Tariq Lamptey’s cross.
Visiting keeper Sam Johnstone had denied Leandro Trossard and Neil Maupay before West Brom fell behind, with the latter also guilty of poor finishing in the 30th minute when his first touch let him down.
West Brom pressed after the break and twice came close as home keeper Matthew Ryan saved a piledriver from Filip Krovinovic before Matheus Pereira shaved the outside of the post with another long-range effort.
Grant, who joined West Brom from Huddersfield Town during the close season, levelled with his first goal for the Baggies when he took a deflected pass into his stride and beat Ryan with an unstoppable shot into the top corner in the 83rd minute.
The 23-year old striker was delighted to open his account for West Brom in only his second game for the club.
“It is great to get a goal so early into my West Brom career,” Grant told the BBC.
“The first half was not so great but second half we definitely showed good character. Every point matters. We want to win games and hopefully we can get the three points next week.”
Brighton visit Tottenham in their next game on Sunday while West Brom are away to bottom team Fulham next Monday. (Reuters)