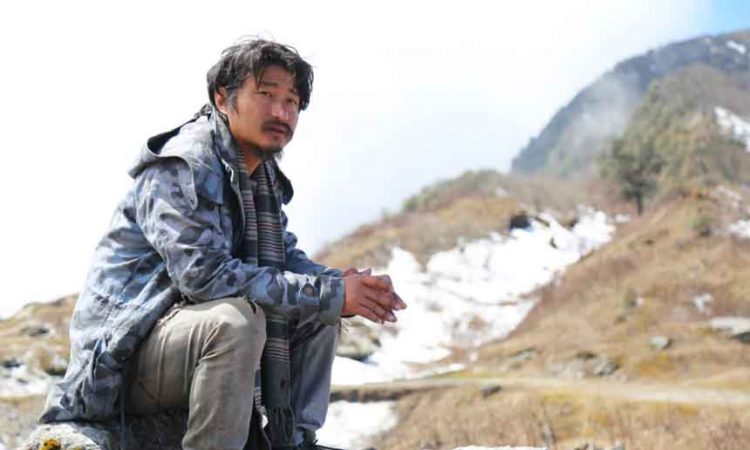 Prasanjit Dutta
DIMAPUR, MAY 23: The rise of OTT (over the top) platforms is changing cinema. So, according to Naga actor, Lanuakum Ao, combined with the changing audience, contents have now become the keystone in filmmaking, resulting in a hunt among filmmakers to tell unique stories.
This, in turn, is removing the limitations once people from certain geographical locations had to face.

Ao, who plays the role of Thapa in the Amazon Original web series The Last Hour, told Nagaland Page that with OTT platforms, the production of movies and web series has increased as everyone tries to be distinct in their storytelling and artists from Northeast India bring uniqueness to the stories and casting.
He, however, expressed belief that it is not about the people of Northeast alone as the stories are now becoming universal allowing anyone from anywhere to fit in.
The actor, of Axone fame, has a significant screen presence in the supernatural thriller series, and is a partner in crime with the antagonist Yama Nadu played by Robin Tamang.
Besides Ao, the series stars Sanjay Kapoor, Raima Sen, Karma Takapa, Shaylee Krishen, and Shahana Goswami in pivotal roles. The Last Hour is now streaming on Amazon Prime and has a rating of 7.9 on IMDb.
Though Ao terms Axone as his “first break” where he played the role of “Bendang”, he has been long associated with the industry and did a number of commercials too for brands like Tata Sky, Vicks, and one with Amitabh Bachchan for Lux Cozi.
“But you might not notice me as I was there for half a second. When Amitabh Bachchan is there, there’s no need to show me. I was just standing behind him,” he laughed.
Besides Axone and The Last Hour, he was also a part of an Ao Naga film Vendetta and Amazon Original’s international project NSR: The Jade.
The latter, however, has been released only for viewers in the UK and the US. Hailing from Mokokchung’s Longsa village, he will be seen next in an Ayushmann Khurrana starrer feature film directed by Anubhav Sinha.
He told Nagaland Page that he wanted to be a number of things but never thought to be an actor, though he had acted in his Church’s initiatives earlier.

It was in 2008 when he was exposed to a 45-day drama workshop conducted by a group which had come from Delhi, that he got the opportunity to learn, act and tour all over the country and this “kept him interested”.
After graduating in 2014 from Mokokchung, he went to Delhi and studied acting at the National School of Drama for 3 years and headed for Mumbai in 2018.
“The Entertainment world is not an easy place to survive if we do not have any backing and contacts. When I first went to Mumbai to pursue acting, I was just like the millions of people who are looking for a break in the movie industry: no friends, no money, no contact and no backing. I had to do many odd jobs and go the extra mile to get noticed and start my career”, he told Nagaland Page.
“Language was my biggest struggle. Hindi being the common spoken language and the medium of the movies here, I stayed up late every night to work on this language as an art. There weren’t many characters in a script that required a Naga face. So, it was very difficult to get a role. But times are changing and there will be better roles for our people in the future.
“For many months, I used to leave early in the morning for auditions from one production house to another and come back late at night to my room with hunger and rejection. I remember the many times I carried extra clothes so that I could change my appearances for the same audition. At times, after standing for long hours in the heat, I was not allowed to audition. But I never let rejection control my emotions and pride. I do not want to be typecast in any way. This is going to be an ongoing struggle for which I need to work hard to prove my competence. I still need to work hard and be single-minded to reach my dream”, he shared.
Despite the struggles, Ao said that his family’s support made things easier for him and he would only refer to himself as successful after he reaches a point where he can choose the roles he wants to take.
He informed that recently he has landed a lead role in a short-film (South Indian) and once the lockdowns restrictions are lifted, the filming would start.
He wants to try out all genres and apparently finds the South Indian Film Industry quite fascinating.
Commenting on the Nagaland film Industry, he said that there is a need to develop the industry so that people from outside the State can proudly talk about working in the film industry and if the quality is good, people will watch them.
However, there’s much to do and lack of dedication and communication are hurdles, Ao said.
“They are very casual. You need to love what you do and it’s lacking in our people”, he said and suggested that to be a good actor, it is important that one reads good books, watch good films and understand that there is no one straight road.

According to him, while luck is needed, interacting with people in the industry is necessary and taking care of the body is essential.
Besides being an actor, he is also a musician, singer and lyricist though he humbly rates himself 3 out of 10 when it comes to singing.
Ao told Nagaland Page that he got interested in acting but wasn’t inspired by any particular actor to choose the career.
But now that he is an actor, he takes inspirations from actors like the late Irrfan Khan, Nawazuddin Siddiqui, both of whom also studied in the same school of acting as Ao, as well as the likes of Kevin Spacey and Joaquin Phoenix to perfect his skills.