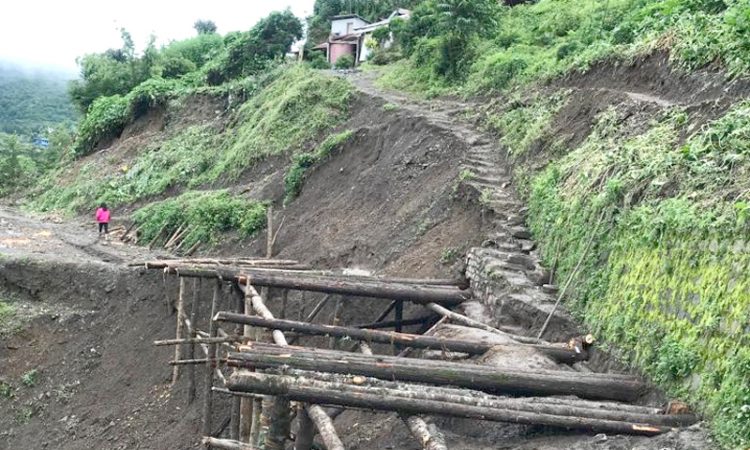 Road cut off by landslide in Pfutsero

Dimapur, July 29: Due to a massive landslide in Pfutsero, nearly 250 feet of a road in Pfutsero leading to Phek and Chetheba road was washed away, leaving the entire stretch of land inaccessible. Villagers and vehicles were unable to ply on that stretch of road. The entire area had been isolated from the rest of the state.
The landslide had caused damages to 8 houses and families in and around that stretch of road had already vacated to safer areas, sources said.
Sources also informed Chakhesang Baptist Church Council (CBCC) and the Mission Colony are now working for building a temporary bridge with wooden logs for use of footpath and light vehicles.
The stretch of the road falls under the National Highways and Infrastructure Development Corporation (NHIDCL), but due to controversies, the completion of this stretch of road was left uncompleted, rather abandoned for the last ten years, as per our sources.
A source on the condition of anonymity said, “We are told new work order was issued a month time back and for want of clearance from Administration the road has not started. Whatever may be, it is the responsibility of welfare government to reach out to open the service road which connects the majority of Phek District including district headquarter.”
When Nagaland Page contacted Deputy Commissioner, Phek, Sachin Jaiswal IAS, he stated that the landslide at Pfutsero happened some twenty to twenty-five days back and people were relocated. He said, “I had spoken to the NHIDCL for monitoring the work, I had also spoken to the engineers, so at this present time to rebuild the road presently on the hillside in this season, there is a danger”.
He further stated that it was told to him by the engineers that the entire slump can come down and it will have devastating effect on the entire Pfutsero town also. Besides this, the NHIDCL was maintaining an alternative route to Chietheba.
He said, “That alternative road is anyway functional, so what I was told is that the only solution is to create a retaining wall first on the valley side and then the cutting can start. So that was what the technical people also told me and meanwhile the alternative route is also being maintained by NHIDCL”.
Sachin Jaiswal said that the NHIDCL engineers visited the site yesterday also and that there is lots of water seepage also.
He said, “In this rainy season, it is difficult for them to construct on the very site because they (NHIDCL) are saying that it is too risky for the machine to be taken there, that is why they have maintained the alternate route which is 500 meters more towards the Chietheba town road and once the seasons improve they will first construct the retaining wall and these are technical things and the technical people will only know.”
He further said they would first construct the retaining wall and then by cutting towards the valley side, they will have to take up the road.
On enquiring on another landslide in Chietheba, Sachin Jaiswal said, “it was a small landslide and it was cleared in one hour by one of the contractors”.
When queried about the delay in clearing the road which caused inconveniences to the villagers and commuters, Sachin Jaiswal said, “The Pfutsero landslide happened twenty to twenty-five days back but then the alternative route was opened the next day only. It is not that the road to the villages was closed or anything such. There is an alternate route which is being maintained by NHIDCL”. (Page News Service)