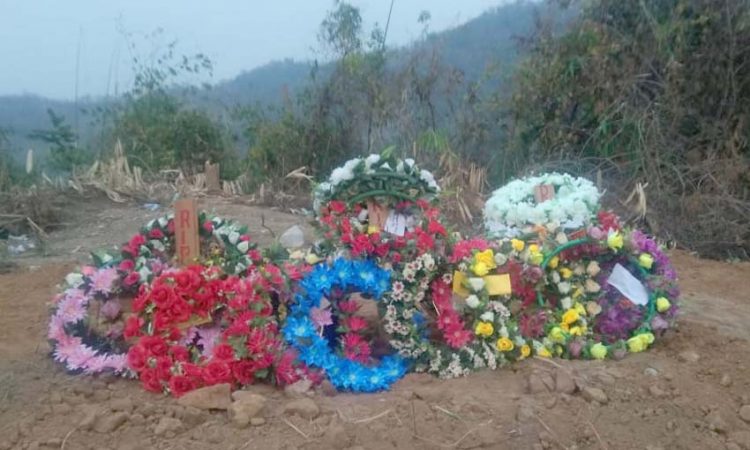 The graveyard of the 3 slain villagers at Lamhainamdi

DIMAPUR, MARCH 23: The brutal killing of 3 persons by a group of unidentified gunmen on March 22, at Lamhainamdi village, in Peren district, has ripped open a wound that has been disentangling gradually, thread by thread, in recent times.

On Tuesday, the Chairman of Lamhainamdi Village Council, Heigumchube told Nagaland Page that on March 22 at around 3:30 p.m., 55-year-old Itingwangbe Haikam, accompanied by his son-in-law Sikamwangbo (21) and another youth, Hangyi (25), had gone to their plot of land in a pick-up truck with construction materials.
There they encountered around 40-60 persons armed with automatic guns, who opened fire upon the unsuspecting villagers, the Chairman said. One of the victims, who had gone under the truck to escape the bullets, was dragged out and shot point-blank, he said.
While some of the gunmen wore camouflage uniform, most of them were in civvies, the Chairman stated.
The gunfire lasted in bursts for around one-and-half hour, according to the Chairman. The miscreants also torched 2 cars and 12 houses, he added.
After the carnage, the Chairman said the miscreants exited towards where they came from ~ the forested area below the village. Lamhainamdi is located 8-9 km away from Jalukie town and has 25 households currently.
What perturbs the villagers is that there is a platoon of 9 IRB personnel stationed in the village “who did not do anything as the firing went on”, lamented the Chairman.
According to the Chairman, the villagers enquired why the IRB personnel were not responding to the situation.
“They said that there was no order from the Peren DC”, Heigumchube said.

Nagaland Government had deployed the IRB platoon after “50-60 persons in full uniform” had burnt down several makeshift huts, tents and structures as well as the village church on September 6, 2019, he said. Again on February 2, 2021, unidentified miscreants had torched 8 houses in Lamhainamdi, he informed.
Soon after the September 6 incident, the State Government had formed a Cabinet Sub-Committee and called for an immediate status quo in the disputed area as well as a halt to all infrastructure and development-related activities.
According to the Chairman, there are around 10 unrecognised villages claiming the area as their ancestral land whereas “the area belongs to Lamhai”. The dispute has its roots here, asserted the Chairman.
Heigumchube said that the Cabinet Sub-Committee has failed to come up with anything, even as the villagers complied with the Government’s directive to maintain status quo for 2 years.
“But when the other parties continue to build structures and farm in the disputed land, we also decided to start after waiting for 2 years,” he said. And now with the killing of 3 persons, the villagers will not cede their position and continue to work on their land, he said.
A funeral service for the 3 slain villagers was held on Tuesday at Lamhainamdi. They were buried on a small mound.
The President of Nagaland Zeliang People Organisation (NZPO), Kevipele Iheilung told Nagaland Page that the Organisation had been working with Western Sumi Hoho in the past to settle the dispute.
On September 25 last year, they had even set up a joint peace committee to mediate between the villages involved in the conflict, he informed.

‘However, in February this year, at another meeting, their villages started talking a different tune and said it is Aqahuto area,’ Iheilung said. So the meeting was inconclusive, he added.
Both the Village Council Chairman and the NZPO President asserted that they want to live peacefully with “our Naga brother and sisters”.
“In our Zeliang culture,” Iheilung said, “even if a snake enters our home, we don’t kill it because it is our guest. Instead we call our neighbour to kill it.” (Page News Service)