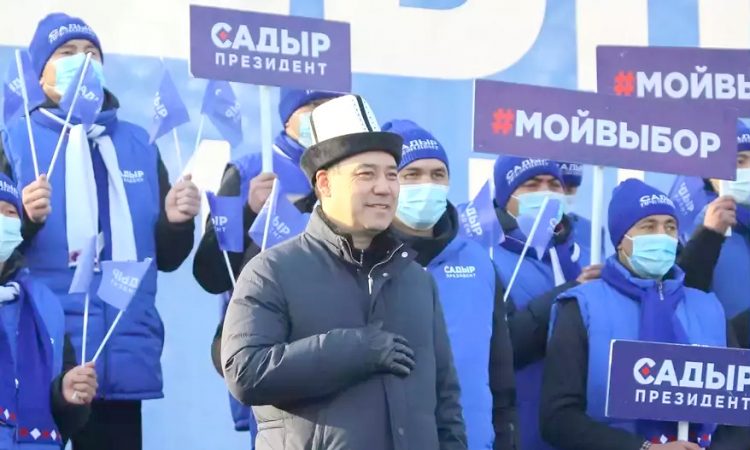 Sadyr Japarov, Kyrgyzstan's Prime Minister and presidential candidate, attends his campaign rally ahead of the presidential election in Bishkek.

BISHKEK, January 11: Just over three months ago, populist Sadyr Japarov, who on Sunday claimed victory in Kyrgyzstan’s presidential elections, was languishing in jail, mourning his parents and a son who all died while he was in prison.

But an October crisis over a disputed vote saw him sprung from his cell by supporters and a court overturn his sentence for hostage-taking, as local power-brokers lined up to back his overnight leadership bid.
Japarov’s rise was so remarkable that it appeared to catch even Kyrgyzstan’s key ally Russia off guard and fuelled speculation over the role that organised crime may have played in the high-speed events.
Yet it was also typical of ex-Soviet Central Asia’s most volatile country, where political fortunes have often been made in street protests first and only later at the ballot box.
Japarov’s election campaign, which packed stadiums across the country despite the threat of the coronavirus, was headlined by banners reading “Sadyr — President”.
The same slogan was chanted by supporters who massed in the capital Bishkek and demanded that Sooronbay Jeenbekov step down in Japarov’s favour, after a parliamentary election marred by vote-buying allegations.
Jeenbekov assented, citing the need to avoid bloodshed as he became the third Kyrgyz leader to resign during political turbulence since independence from Moscow in 1991.
Japarov became head of state on an interim basis, quitting the post in November to compete in Sunday’s vote while installing loyalists in key positions to retain his grip.
Results published on Sunday by the ex-Soviet country’s Central Election Commission (CEC) showed Japarov with close to 80 percent of the vote after an automated count.
Japarov, 52, entered Kyrgyzstan’s political scene as a lawmaker in 2005, after building up a small oil business in his native eastern Issyk-Kul region.
His star rose under the patronage of then-president Kurmanbek Bakiyev, who appointed him head of the anti-corruption agency in 2008.
But the agency’s investigations never touched on the family of Bakiyev — widely viewed as the main beneficiary of systemic graft at the time.
Bakiyev was overthrown in 2010, in a revolution far more violent than the one that displaced the first post-Soviet president Askar Akayev five years before.
Violence erupted between ethnic Kyrgyz and minority Uzbeks two months later, claiming hundreds of lives.
A nationalist opposition party that included Japarov among its leaders won parliamentary polls later that year, but was shut out of the ruling coalition.
Japarov’s political brand then became associated with chaotic rallies against the Canadian operators of Kyrgyzstan’s largest gold mine, which contributes up to 10 percent of national output but has been dogged by corruption accusations and environmental concerns.
During one rally in his native province in 2013 the local governor was briefly taken hostage and doused with petrol.
Authorities then opened a criminal case against Japarov, who fled the country.
Japarov used his exile to make connections among the million-strong Kyrgyz diaspora that works in Russia and Kazakhstan.
When he returned home from neighbouring Kazakhstan in 2017, Japarov was jailed on hostage-taking charges and later sentenced to 11.5 years in prison.
During this time he lost his father and mother, as well as one of his sons, who died in a road accident. He always insisted on his innocence.
Japarov now faces an uphill battle to revamp the pandemic-battered economy of the second-poorest Soviet successor state and make good on pledges to battle corruption and organised crime — both systemic problems.
Winning the trust of Russia, a key partner that mediated in last year’s crisis, could be another challenge.
President Vladimir Putin described the overthrow of the previous government as a “misfortune” in October and chided Kyrgyz politicians for attempting to imitate Western democracies during his end of year press-conference.
“The level of political consciousness, the maturity of institutions is not the same as, say, in France,” Putin said. (Agencies)