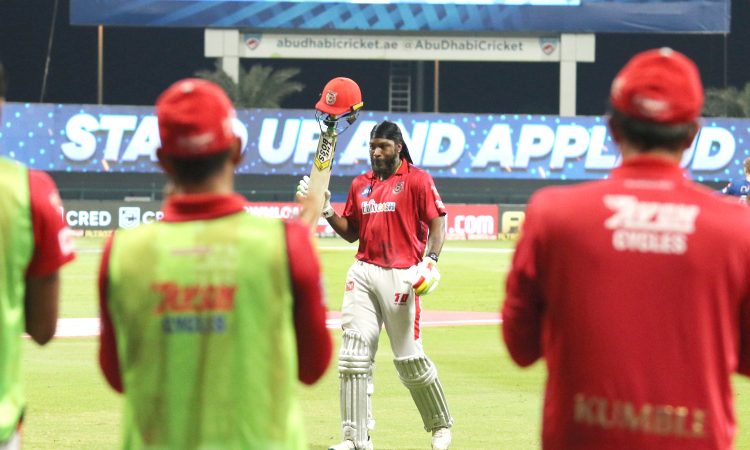 ABU DHABI (UAE), October 30: Rajasthan Royals stopped the dream run of Kings XI Punjab as they registered an emphatic seven-wicket win in their Indian Premier League match in Abu Dhabi on Friday. This victory put Rajasthan Royals back in the hunt for the play-offs.
Chasing the competitive total of 186, Rajasthan Royals were off to a flying start. Ben Stokes and Robin Uthappa added 60 runs for the first wicket. Ben Stokes, who was coming to the match on the back of a brilliant century, picked up where he has left against Mumbai Indians.
Stokes continued his menacing form and completed his half-century in just 24 balls with a six over long-off. Chris Jordan halted the blistering innings of Stokes (50 off 26b; 6×4 3×6).
Stokes’ departure didn’t choke the scoring rate as Sanju Samson (48 off 25b; 4×4, 3×6) , and Robin Uthappa kept pace.
Steve Smith (31 off 20b; 5×4, 0x6) and Jos Butler (22 off 11b; 1×4, 2×6) steered their team home comfortably.
Earlier, it was a Chris Gayle (99 off 63b; 6×4, 8×6) show, who made the most of the dropped catches and scored his third half-century in six matches he has played so far.
The West Indian was on song against the Rajasthan Royals and became the first cricketer to hit 1,000 sixes in T20 cricket in the process. Only a terrific delivery from Archer stops him from getting to his century.
After being put to bat by Steve Smith, Kings XI Punjab had a dramatic start.
Jofra Archer removed Mandeep Singh on a golden duck with a brute of a bouncer in the first over. Mandeep took his eyes away from the ball, and Ben Stokes ran in from the point, dives full length, and takes a brilliant catch.
Gayle and captain KL Rahul (46 off 41b; 3×4, 2×6) took the Rajasthan Royals bowlers to the cleaners.
In search of the wicket, Smith brought back Archer in the 14th over, but both he conceded 11 runs. However, in the next over, Stokes got Rajasthan Royals, the Prized wicket of KL Rahul, and broke the 120-runs partnership for the second wicket.
Next in, Nicholas Pooran (22 off 10b; 0x4, 3×6) doesn’t take long to get going. He smacked two sixes off Aaron’s bowling in the 16th over. Pooran and Gayle put on 41 runs in just 20 balls.
For Rajasthan Royals, Jofra Archer (2/26) and Ben Stokes (2/32) bagged two wickets.
Chris Gayle becomes first player to smash 1000 sixes in T20 cricket
Swashbuckling batsman Chris Gayle has added another feather to his illustrious cap as he became the first player to smash 1,000 sixes in T20 cricket.
Gayle achieved the feat during an Indian Premier League (IPL) match against Rajasthan Royals at the Sheikh Zayed Stadium on Friday.
He played a knock of 99 of 63 including eight sixes and six fours. The ‘Universe Boss’ was seven sixes away from the milestone figure in the shortest format of the game. Playing in his 409th game, Gayle smashed his 1,000th six.
The West Indian is leading the chart for the maximum sixes in the T20s. Kieron Pollard is in second place with 690 sixes in 524 games while former Kiwi attacking batsman Brendon McCullum is in third place with 485 sixes in 370 matches. Rohit Sharma is the only Indian batsman in the top-10 with 376 sixes in 337 games.
Gayle’s gutsy knock and a cameo by Nicholas Pooran (22 runs off 10 balls) powered KXIP to 185 runs. (TNN/ANI)