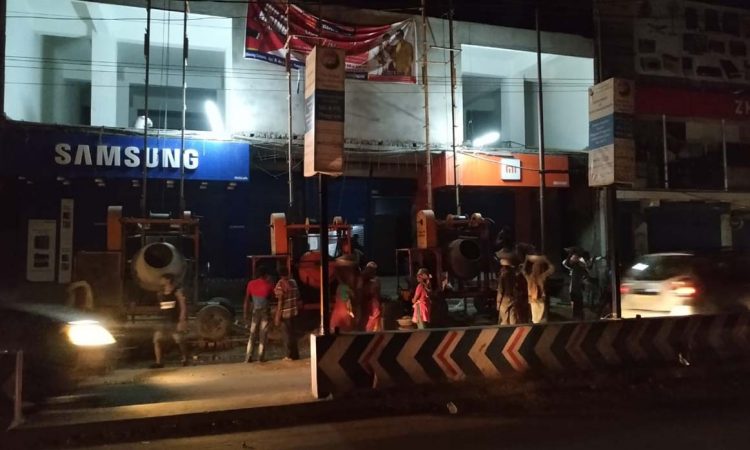 Dimapur, August 5: The kushi-kushi culture of the Nagas that Chief Minister Neiphiu Rio never forgets to remind the people to do away with continues unabated under the very nose of the State authorities causing immense discomfort to the general populace.
In one such instance, the construction of a private building in the heart of Dimapur town caused severe inconvenience to commuters for two nights in a row since Saturday with the private contractor/owner of the building literally taking over one lane of the busy Nyamo Lotha road (opposite St. Montessori School) here blocking free flow of vehicles.
Reportedly the private constructor had on Saturday closed the entry on one lane of the busy road to ease his construction work leaving only one lane for vehicular movement. On Sunday, while the lane was not closed, the melee of construction workers on the road side hindered smooth flow of vehicle.
Deputy Commissioner of Police, Traffic 1, Jatila Jamir told Nagaland Page that no permission was taken from the traffic authority by the contractor to close the one lane of the road and assured to look into the matter with “utmost concern.”
“No such permission was taken. Why people are not abiding by rules and regulations. They should have informed us”, she said.
Commuters and passersby finding no other options had to take the opposite lane to commute. On Saturday the entire stretch of Nyamo Lotha road was swelling with hordes of vehicles in one single lane, and it was providence that no untoward accident happened.
“It caused immense hardships and inconveniences to me and my family. My vehicle was about to be smashed by another car coming from the opposite direction. One lane in the Nyamo Lotha road was closed due to this private construction and all the vehicles were plying on one single road. Chances of accidents were high”, a woman who did not want to be named told Nagaland Page.
It may be noted that Dimapur is a fast developing town and new buildings near the road sides are sprawling up one after the other. The building owners and contractors randomly dump building materials and park construction related vehicles on the roadside blocking free flow of traffic causing inconveniences to the people.
Many such cases had been reported where the owner and the contractors, even Government departments and private construction companies without informing the Dimapur Traffic Police are constructing buildings and commercial complexes flouting rules. Dimapur Traffic Police had many times taken to task contractors for their sheer act of negligence and showing disregard to rules and regulations, but such disregard for rules continues unabated.
(Page News Service)