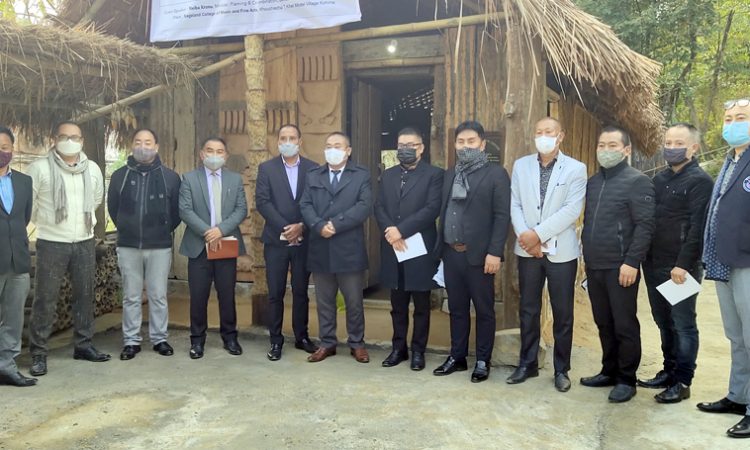 Kohima, December 10: Nagaland Minister for Planning & Coordination, Land Revenue and Parliamentary Affairs, Neiba Kronu today stressed on the need for more thorough research and avenues to promote traditional Naga music and take it to the world.

Speaking during the inauguration of Naga Music Research Center at Nagaland College of Music and Fine Arts (NCMFA) campus, Kronu said music is a friend and melody for all generation of people as everyone listens to music whenever happy or sad.
Maintaining that music has no boundaries while it has different genre meant for every occasion, the Minister said Nagas have come to a certain stage in the field of music and many youngsters are doing very well.
Nonetheless, with Nagaland Chief Minister Neiphiu Rio’s initiative to make music an industry in the state there is lot of progress.
Music can express one’s deep feeling in words while without words also music is beautiful and touching, he said while maintaining that Naga music needs to be upgraded while Naga musicians have to stay updated.
Lauding NCMFA for coming up with the idea of Naga Music Research Center despite being established recently, the Minister expressed hope that initiatives would be taken to get extensive knowledge of the Naga traditional music.
Nagas have been to others countries too and it is encouraging to see the progress of our youths in the field of music, he said, adding that with fast changing world, we also have to equip our music accordingly and also promote modern Naga songs.
Stating that while lot has to be done towards attaining quality music in the State, Kronu on the part of government asserted to extend support towards exploring the avenues for research and promote Naga music.
Newly elected MLA, Advisor for technical Education and Elections, Medo Yhokha accompanied the minister.
NCMFA managing director Vesato Theluo said that Nagas are music lovers.
“We have rich culture & music,” he said adding “Having the concern and the desire to preserve our rich and beautiful culture and music and to promote our Naga music in the field of Music Education and Industry, NCMFA have come up with this concept to start this project called as Naga Music Research Centre.”
He said that NCMFA have a wider vision to make it big in future and “carry our culture and music to the next level of research for our younger generations to experience and be rooted in our original culture and music.”
With the help of Rural Development department, the project has been brought thus far, he said whie requesting the government to help achieve this noble project for the Nagas as a whole traditional community.”
Meanwhile, Theluo maintained that under the leadership of Nagaland’s Chief Minister Neiphiu Rio, the present government is doing a lot for music industry “so we are grateful to him and his government as well.”
(Page News Service)