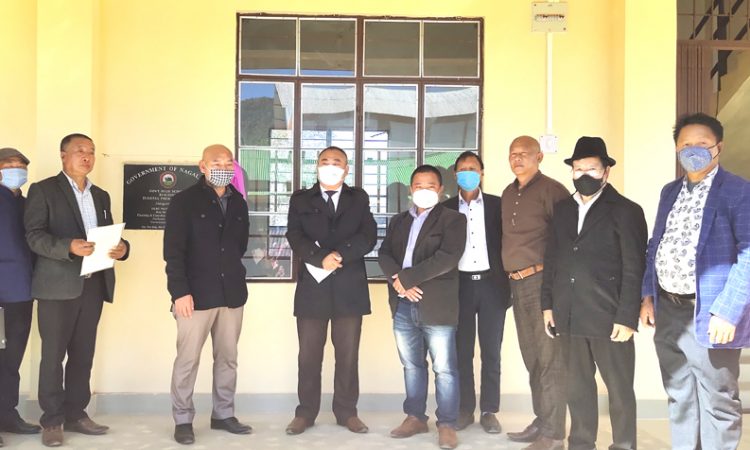 It includes Government High School Zuketsa building, strengthening of existing school building under Samagra Shiksha, GA Rest House under CAWD Nagaland and Tribal Hostel Building under Ministry of Tribal Affairs, Government of India.
Addressing the gathering, the minister while appreciating the villagers for judicious use of the funds provided by the government, he lauded the good example shown without delaying the project and price escalation.
He also appreciated the collective effort in renovating the old building without fund provided by the government.
He said that as per the Education policy, depending on the number of enrollment and also performance of schools decision are being taken to merge the school.
The Minister further urged upon the public to take proper care of the government projects in the interest of all.
He described people of Zuketsa area as peace loving and hard working people with agriculture being the main stay of the people of the area.
Touching on high scope of agricultural related activities in Zuketsa area, he assured that the government will continue to give special attention towards strengthening of agri and allied activities across Nagaland.
Also bringing cheers to the commuters, Kronu assured repairing and maintenance of Viswema-Zuketsa road till Pfutsero, adding that the process will start before Christmas.
Government is also working hard to promote agricultural activities, besides other development works, he said.
Also speaking on the occasion, Joint Mission Director Samagra Shiksha Nagaland, Dr. Kevizakie Rio stressed on the need for increasing the enrollment of students in government schools saying that government appoints the best qualified teachers.
He said that under the Right to Education Act, the government has been opening schools in all the villages so as to provide quality education to students.
Appreciating the judicious use of the fund in construction of RCC structured school buildings at Zuketsa, he said enrollment has to improve both in the school and hostel to avail the more developmental funds.
Earlier, the function was led by Chakhesang Public Organisation president Mikha Kenye while welcome address was delivered by Zuketsa Area Public Organisation (ZAPO) president Sabou Krome.
Vote of thanks was proposed by ZAPO finance secretary Kedoutsolhi Wetsah.
Later, Kronu inaugurated Zapami Village Hostel constructed under Article 275(1) during 2019-2020. (Page News Service)