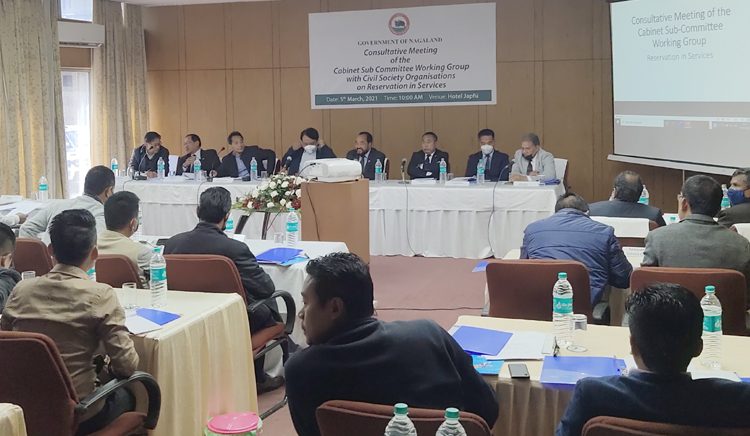 Kohima, March 5: Nagaland Minister for Planning & Coordination, Neiba Kronu today highlighted the chronology of the job reservation policy for the backward tribes in the State.

In his introductory remark during the consultative meeting on reservation policy held here, Kronu said that the issue of reservation in Government services have been deliberated by various committees in the past like the Banuo Jamir Committee, Kevichusa Committee, Temjen Toy Committee, etc. while reservation for indigenous Nagas was introduced in 1967, the reservation policy for backward tribes has been in existence since 1977.
Over the last 44 years of its implementation in the State, the reservation policy has undergone several changes, he said, adding that no policy is perfect and needs to evolve with time and accordingly, the Government decided to review the existing reservation policy.
Kronu stated that in August 2019, a Review Committee on Job Reservation policy was constituted under the chairperson of Sentiyanger Imchen, ACS & Development Commissioner and members consisting of Home Commissioner, Administrative Head of P&AR, Administrative Head of DIJDA and Director, DUDA as member secretary.
The Cabinet in its meeting held on 2nd March, 2020 decided to reconstitute the committee to review the existing reservation policy of the State under the chairmanship of J. Alam, ACS & Development Commissioner with members from P&AR Department, Home Department, DUDA and Justice & Law Department, he said, adding that the committee is yet to submit its report to the Cabinet Sub-Committee.
He said that the State Government had decided to set up NSSB and it was notified on 20th July 2020, however, due to various grievances voiced about its composition and scope, etc., the NSSB was kept on hold by the Cabinet and it has not yet started functioning.
The present Cabinet sub-committee was constituted in light of the ENSF charter of demands rejecting the present form of the NSSB regulations, 2020 and certain other grievances relating to implementation of the reservation policy by the NPSC, he said.
Kronu informed that the Cabinet on 18th December, 2020 discussed the representation submitted to the Chief Minister on 14th December, 2020 by the Core Committee on Rationalization of Reservation Policy (CCoRoRP) on Nagaland Reservation Policy consisting of the five tribal student bodies – All Sumi Students’ Union (SKK), Angami Students’ Union (ASU), Ao Students’ Union (AKM), Lotha Students’ Union (LSU) and Rengma Students’ Union (RSU) and another representation from Tenyimia Students Organizations.
He said that the Cabinet sub-committee felt that the issues relating to reservation and functioning of NSSB required wider consultation and asked for views and thoughts to have a comprehensive look at the Reservation Policy of the State.
Reservation for the Backward Tribes (BT) in Nagaland began in 1977 when the State implemented 25% reservation in non-technical and non-gazetted posts for 7 tribes which were identified as Backward Tribes because they were educationally and economically backward and also having insignificant representation in the services in the State for a period of 10 years, he said.