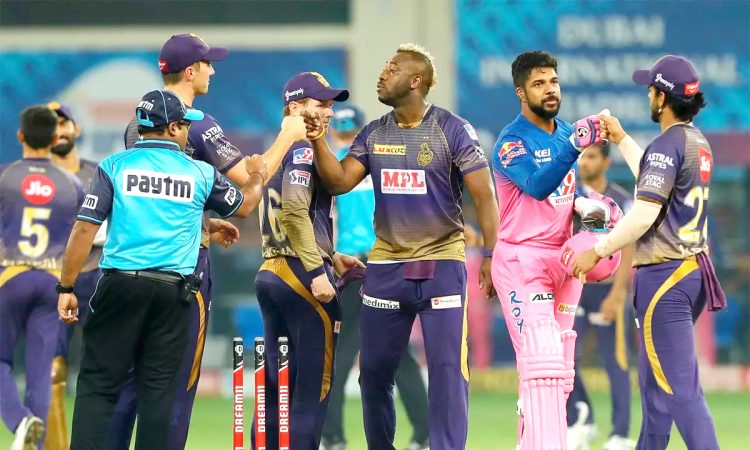 DUBAI, November 2: Captain Eoin Morgan displayed his big heart and Pat Cummins justified his multi-million dollar price tag while keeping Kolkata Knight Riders’ slender IPL play-off hopes alive with a resounding 60-run victory over Rajasthan Royals on Sunday.
On a day when it mattered, Morgan owned the stage with a power-packed 68 not out off 35 balls with a half a dozen of sixes apart from five boundaries in Kolkata Knight Riders’ 191 for 7.
Then it was the turn of Cummins (4/29) to produce a deadly opening spell that rattled the Royals and they could only muster 131 for 9 as another campaign ended without qualifying for the play-offs.
Varun Chakravarthy (2/20 in 4 overs) has been buoyed since his India callup and produced another performance of note as Jos Buttler (35) and Rahul Tewatia (31) were the only notable contributors for Royals.
One of the highlights was a spectacular airborne take by Dinesh Karthik to dismiss Royals’ premier player Ben Stokes off Cummins’ bowling. Karthik had four catches on the day.
KKR finished the league stage with 14 points from 14 games with a net runrate of -0.214, which currently puts them in fourth spot in the table for a day.
Their entry into the play-offs will now depend on the result of the matches between Delhi Capitals (-0.159) and Royal Challengers Bangalore (-0.145) as well as the one where Sunrisers Hyderabad (+0.555) take on defending champions Mumbai Indians, who have already qualified.
In case SRH wins, KKR’s chances of qualification will hinge on a real poor defeat for either DC or RCB in their particular game.
Morgan top-notch knock was studded with six maximums and five fours as KKR amassed 59 in the last five overs.
Earlier, Shubman Gill (36) and Rahul Tripathi (39) shared a 72-run stand for the second wicket, while Andre Russell had a 11-ball-25 to his credit.
For Royals, leg-spinner Rahul Tewatia (3/25) and Kartik Tyagi (2/36) were the most successful bowlers.
Sent in to bat, Nitish Rana fell for a first-ball duck after he edged a Jofra Archer delivery and was caught behind. But the opener went for a review only to waste it early.
Shubman Gill (36), however, looked in good touch as he blasted three boundaries off Varun Aaron and then sent spinner Shreyas Gopal soaring over the ropes twice.
Rahul Tripathi (39), who looked uncomfortable against pace early on, also got into the act, smashing Gopal for a couple of fours as KKR scored 17 runs in the fourth over.
Ben Stokes then went for 11 runs with Tripathi pulling him for a six in the last ball.
The two batsmen hit one four each off Aaron as KKR scored 55 for one in the powerplay.
Rahul Tewatia then struck twice, dismissing Gill and Sunil Narine (0) to reduce KKR to 74 for 3 in 9 overs. While Gill holed out to Jos Buttler at deep mid-wicket, Narine’s miscued shot landed safely in the hands of Stokes at long-on.
In the 13th over, Gopal returned to remove Tripathi, who was caught by Robin Uthappa at deep square leg.
Dinesh Karthik (0) then became the third victim of Tewatia after his inside edge was caught by Steve Smith at short mid-wicket as KKR slumped to 99 for 5.
Morgan then exploded, smashing Gopal for two fours and as many as sixes as KKR piled up 21 in the 14th over and their innings regained momentum.
Russell blasted successive sixes before being sent back by Kartik Tyagi.
In the 19th over, KKR racked up 24 runs off Stokes with Morgan picking up two sixes and a four.
Morgan then ended the innings with another six off the last ball. (PTI)