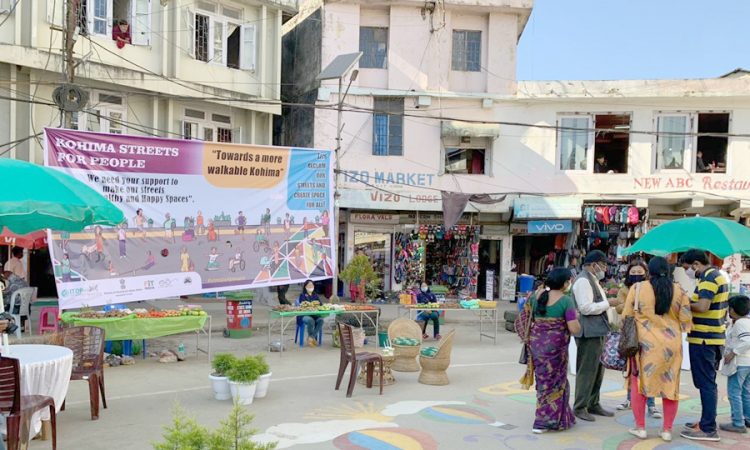 The parking site in Kohima between the Old Nagaland State Transport Station and Razhü Point would have been packed with vehicles parked on all sides on any given day. However, food trucks, street vendors, hawkers, pedestrians, skateboarders and cyclists thronged the same location with inviting aroma of chicken barbecues in the air on this sunny weekend in November.
This spectacle was created out of the necessity for Kohima Smart City to re-imagine the spaces of the road to make it people-friendly and also create an income generation avenues for street vendors as part of the “Street for People Challenge,” that was launched by Hardeep Singh Puri, Minister of State, in charge of Ministry of Housing and Urban Affairs (MoHUA) at a virtual event organized by Smart Cities Mission, MoHUA, on September 11.
“The vision envisaged for this challenge is to share the space of the roads with vehicles and people as well,” explained Kezhochole Rhetso, Nodal Officer for “Street for People Challenge,” KSCDL.
“We hope to usher in income generating avenues for street vendors while co-existing with pedestrians and motorists alike through the creation of spaces in the street for people by raising awareness to the public that streets can be shared,” she added.
The challenge also requires every city to recreate the space and make it people friendly by re-imagining the streets in order to be inclusive of all citizens including the aged, children and differently-abled so the initiative is also toward making the roads safe for pedestrians, cyclists and street vendors, Rhetso said.
The nodal officer also informed that the MoHUA is anticipating the cities to come up with one project by February 11, 2020, and are expected to submit a Detailed Project Report.
Rhetso maintained that a core committee, under KSCDL, is engaging with professionals such as district administrators, traffic police, the business community and representatives of differently abled citizens, civil societies, women, wards and youths in order to identify a street where such a project can be put in place permanently.
On the wall of feedback from citizens who participated in Saturday’s event, one Dr. Ajung wrote, “It’s so good to see this great initiative and the city looks more alive and beautiful. The food is awesome and affordable.”
One Nizo Meyase also wrote, “A refreshing break from the monotonous town streets, hope to see this continuing.”
Meanwhile, in a statement, CEO, Kohima Smart City Development Limited, Kovi Meyase said this was an open space initiative to envision and test how streets can be transformed into happy, safe and inclusive spaces for everyone. The KSCDL assured to work towards identifying more locations around town where open street spaces can be carved out permanently for all citizens to use and enjoy.

It may be mentioned that in order to ensure a green recovery from COVID-19, the Ministry of Housing and Urban Affairs launched the “Streets for People Challenge” to inspire cities to create walking friendly streets through quick measures and to re-imagine their streets as public spaces through the lens of economic regeneration, safety and child-friendly interventions with inclusive designing.
Cities can test quick, innovative and low-cost interventions using elements such as planters, seaters, barricades, signages, paints, makeshift play equipments and by engaging with the community through events and campaigns. In the longer term, the MoHUA encourages cities to convert these temporary interventions into permanent ones.
As part of the challenge, the KSCDL is organizing an open streets campaign around the city to create awareness on the need to share street spaces with cyclists, pedestrians and citizens including children, the elderly and people with disabilities.
Towards creating an inclusive space, the Kohima Smart City, in collaboration with the Kohima Traffic Police, and in consultation with the Nagaland State Disability Forum, also earmarked a parking space reserved exclusively for people with disabilities just outside Rutsa Bakery. The Kohima Traffic Police stated that they will try to identify parking spaces for PWDs in strategic locations around the town.
Towards making Kohima a people friendly and a more walkable city, the KSCDL has sought support of the citizens.