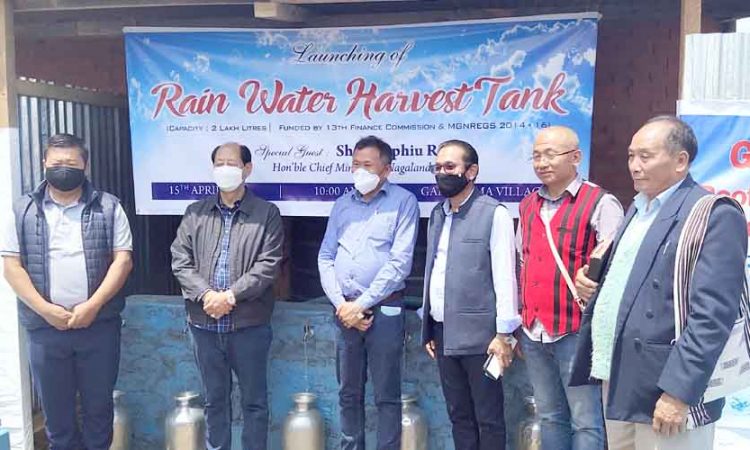 Chief Minister Rio with others during the launch of rain water harvest tank at Gariphema village on April 15, 2021.

Kohima, April 15: Chief Minister Neiphiu Rio on Thursday admitted that Kohima is in the midst of a huge water crisis with the State capital facing a shortage of at least 80% of the daily total water requirement.

“Despite the commissioning of the Zarü water sources to Kohima town, which can supply up to 3.80 million litres of water everyday through pumping, the capital still lacks about 80% of water supply. Even at my bungalow we still do not have water supply linkage,” he said while dedicating a 2 lakh litres tank to harvest rain water at Gariphema village today.
Funded by the 13th Finance Commission and MGNREGS 2014-16, the village has constructed the 2 lakh litres tank to harvest rain water for the village populace. Dedicating the water tank at the village council hall today, Rio released the water taps.
Speaking on the occasion, the Chief Minister stressed on proper water management to meet the growing demands.
“Water management is one huge reason why we lack water,” he stated.
Highlighting that Prime Minister Narendra Modi started the Jal Shakti campaign in March 22 this year on the theme “Catch the rain where it falls when it falls,” Rio said this means we need to manage water. Nagaland during summer it rains excessively and there is too much water, but in winter there are no water even for drinking and other works, he said.
Rio recalled that in 2019 there was too much rain causing huge destruction, disrupting transport connectivity services to Kiphire and Tuensang districts while 2020 had too little rain leading to shortage of water. Climate change is causing water sources to dry up, he said.
There are instances where too much rain causes floods while in other places there are severe droughts but in Nagaland we do not face such severe situations, he said.
The CM reminded that in the olden days we didn’t know of buying water but in current times water has become a priceless component and a lucrative business for water vehicles. If Kohima needs to get enough water we need to tap Dzükou water sources, he said.
We need to look for good water sources to meet the expanding villages, he added.

Chief Engineer of Water Resources Department, Hotovi Khana while making a presentation on Jal Shakti Abhivan Phase-II said it was launched during 2019 with a target to cover 256 water stressed districts in the country, where Longleng district was also a part of the campaign. Encouraged with the success of the campaign, the ministry launched the Phase-II campaign on the theme ‘Catch the rain, where it falls, when it falls’.
The campaign will be implemented till November 30, 2021, he said.
Chaired by Gariphema village council chairman Vibeilietuo Kets the dedicatory prayer was offered by Pastor of NCRC Gariphema village Thekruzhü Khana. (Page News Service)