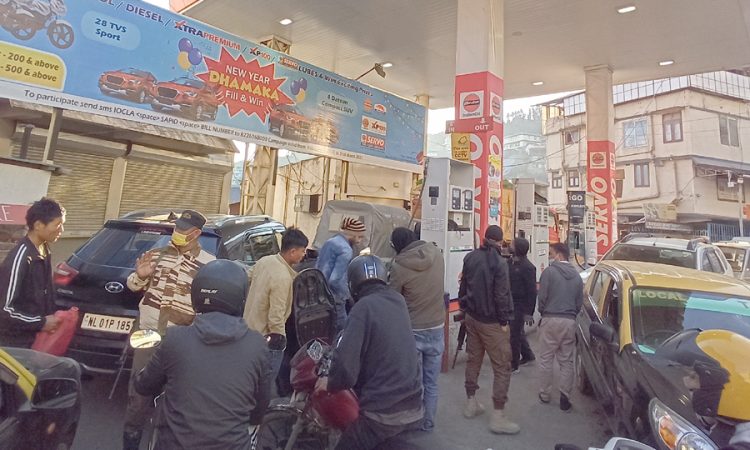 Kohima, February 9: State capital Kohima is reeling under acute shortage of petrol and diesel for the last one week even as authorities here continue to remain mum on the status of fuel availability in the city.

With all the oil depots in the district closed on Monday, vehicle owners from all nooks and corners of the city thronged the oil depot near Mohonkhola junction here on Tuesday causing a massive traffic jam. At one point, the stretch of the traffic snarl extended from TCP Gate to Lerie Colony, which is roughly 3 kilometres. The serpentine jam was observed from early Tuesday morning and lasted into the night.
While all the petrol pumps have locked their gates to keep out unnecessary inquisitive customers, those selling petrol in black are said to have increased the rates to Rs 120 per litre adding more problems to the citizens.
Sources from petroleum dealers hinted that fuel may reach Kohima only by Friday while unconfirmed sources informed that some tankers were allowed to move towards Kohima on Tuesday evening.
Authorities here have so far not issued any statement on why fuel stations in Kohima have remained empty, but sources blamed closure of NH-29 in view of the rockslide on February 2 near New Chumukedima village for the shortage.
The Dimapur district administration had imposed restriction on movement of vehicles in the stretch of NH-29 between Patkai Bridge and Kukidolong following the incident that caused damage to some vehicles and injury to commuters.
The State Government has directed lorries and trucks carrying essential commodities to ply via Merepani-Bhandari-Wokha-Kohima till the rockslide is cleared at New Chumukedima.
Taking opportunity of the road blockade as well as fuel shortage, taxi fare between Kohima and Dimapur has already jumped to Rs 700, taking a toll on the public.
To stock fuel some people are reportedly even going upto Wokha, which is 84 km away from here.

The State capital is at the mercy of NH-29 to connect with the commercial city Dimapur. The situation might worsen in the coming monsoon season. The other shortest route that connects Kohima with Dimapur is the Dimapur-Niuland-Zhadima, but this road has been neglected by the Government.
Till now the State Government has not thought of having fuel depot in Kohima.
(Page News Service)