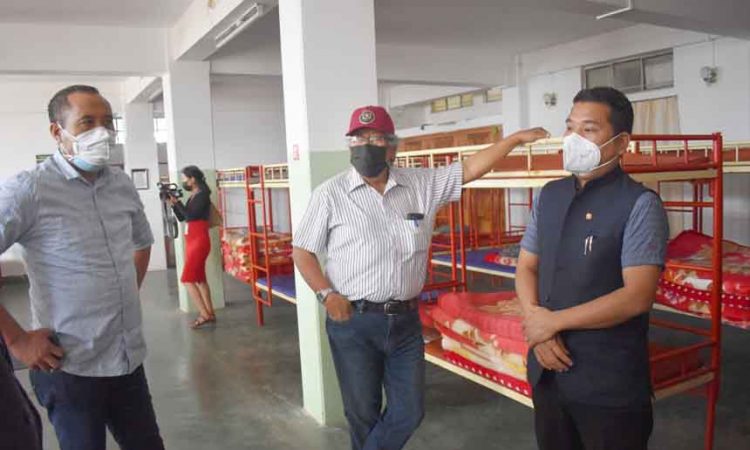 Dimapur, May 20: Kohima District Task Force in-charge, Tongpang Ozukum along with a host of officials visited Jubilee Memorial Center (JMC) at Lerie Colony on May 20, which was freely granted to Kohima District Task Force by Kohima Ao Baptist Arogo (KABA) to be utilized as quarantine facility for health care workers of Nagaland Hospital Authority Kohima (NHAK) during this Covid pandemic time.

Minister Tongpang Ozukum thanked KABA on behalf of Kohima DTF and the Government for coming forward and granting Jubilee Memorial Center to be utilized as quarantine center by NHAK officials and staffs.
The minister also explicitly mentioned that even last year KABA came to the fore and allowed Kohima DTF to utilize the facility for almost five months, which was a big relief for the DTF as well as the Government in times of need. He said the willingness and charitable offer of the facility to the DTF by KABA shows their concern for the people and their commitment to fight the pandemic.
Advisor and member DTF Kohima, Medo Yhokha thanked KABA on behalf of the Government and citizens of Kohima for coming forward with their ‘charitable initiatives towards humanity’. He also shared his concern about certain individuals who were constantly critical and finding faults with allegations on the efficacies of the State Government and other frontline institutes on handling the current pandemic.
The Advisor stated that this is an extraordinary situation and the fight to overcome the pandemic has to be everybody’s fight and not the responsibility of the health institutes and Government of the day alone.
“Until and unless every citizen comes together, shouldering a common responsibility, no Government or authority will be able to effectively control this pandemic as the behavior of the people will decide the course of these trying times”, Yhokha stated.

Advisor and Kohima District Task Force member, Dr Nicky Kire expressed gratitude on behalf of the DTF Kohima for allowing the use of the well maintained Jubilee Memorial Center, to accommodate the front line and health workers.
He also requested the residents of Lerie colony not to oppose the initiatives of the District Task Force, which was taken in the greater interest of the frontline and health workers.
(Page News Service)