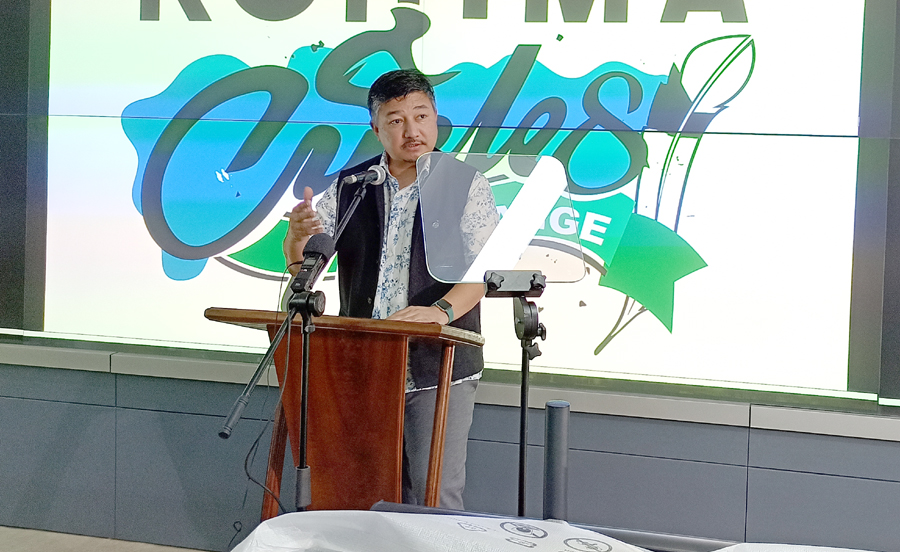 Kohima, September 25: Kohima Cycles4change App, a user friendly mobile app designed and developed by Kohima Smart City Development Ltd (KSCDL) for citizens and tourists alike was launched by Advisor to the Chief Minister of Nagaland, Abu Metha at the Integrated Command & Control Centre (ICCC), Kohima Smart City, Kohima on September 25.
While lauding the effort of the IT team behind the app, Metha said, “We all know that technology is the way forward to finding solutions to everyday problems and everyday challenges.”
Metha also said that there is no reason why we should not have cycle lanes coming up. “We need to push policy makers and policy implementers to ensure that we have cycle lanes coming up,” he said.
Basing his observation on the slides and presentation the KSCDL made before his address, Metha also said, “I can see that wonderful initiatives are coming up and surely the Government will definitely support your ventures, we will promote cycling as a sport, a lifestyle and we will ensure that young people with ideas will be supported in your endeavours and aspirations.”
Talking about the app, CEO KSCDL, Kovi Meyase said that Kohima Cycles4change mobile app was designed and developed in-house by the IT team of Kohima Smart City with the aim to gain visibility and outreach.
A simple and a user friendly app for the citizens and tourists alike, Meyase said that the app can be used to access information about cycling routes, mountain biking trail networks, cycling clubs and shops in Kohima. The app will also give notification on cycling events and in-app messages; you can also rent a bike directly through this app and access any information on Kohima Cycles4change campaign and other initiatives that have been taken by Kohima Smart City, Meyase added.
Giving an overview of the app, CEO KSCDL, Meyase said that the India Cycles4change challenge was announced by the Ministry of Housing and Urban Affairs (MoHUA) in June this year amidst the pandemic to “inspire cities to implement quick cycling friendly interventions in the wake of COVID-19 with the support of their citizens and assistance from experts.”
Meyase also informed that 95 out of the 100 smart cities are taking part in the challenge, out of which 11 cities would be shortlisted in the stage 1 and eligible for a cash award of Rs. 1 Crore to further promote cycling in the city with the help of international experts. Cities have been mandated to create cycling networks using low-cost methods like pop-up cycle lanes, non-motorised zones and set up community-led cycle rental schemes, he said.
Further listing out the various projects undertaken by Kohima Smart City toward the India Cycles4Change challenge, Meyase said that Kohima registered for the challenge on July 27 and formed its strategic action plan based on 3 broad principles of “aggressive social media campaign, community engagement and implementation of pilot interventions.” This was followed by online registration of cyclists and volunteers on July 27 and the launch of the official Kohima Cycles4Change logo on July 29.
The campaign also rolled out the online cycling survey for citizens on August 4 to which 1500 people have responded so far.
The Kohima Cycles4Change campaign was officially launched by Advisor Urban Development & Municipal Affairs, Neikeisalie Kire on August 15, which was followed by a free bicycle repair clinic on August 16.
Kohima Smart City also conducted a Handle Bar Survey on August 28 and a free cycle training and workshop on August 29.
In addition to the number of initiatives and interventions undertaken by Kohima, Meyase said that some of the upcoming interventions in the pipeline is to organise a community-led Bicycle Rental Program by next week, launch the Public Bicycle Pump Track(reportedly the first of its kind in the Northeast) and launching of the official Kohima Cycles4Change promotional video. (Page News Service)

2nd round of National Deworming Day observed in Nagaland