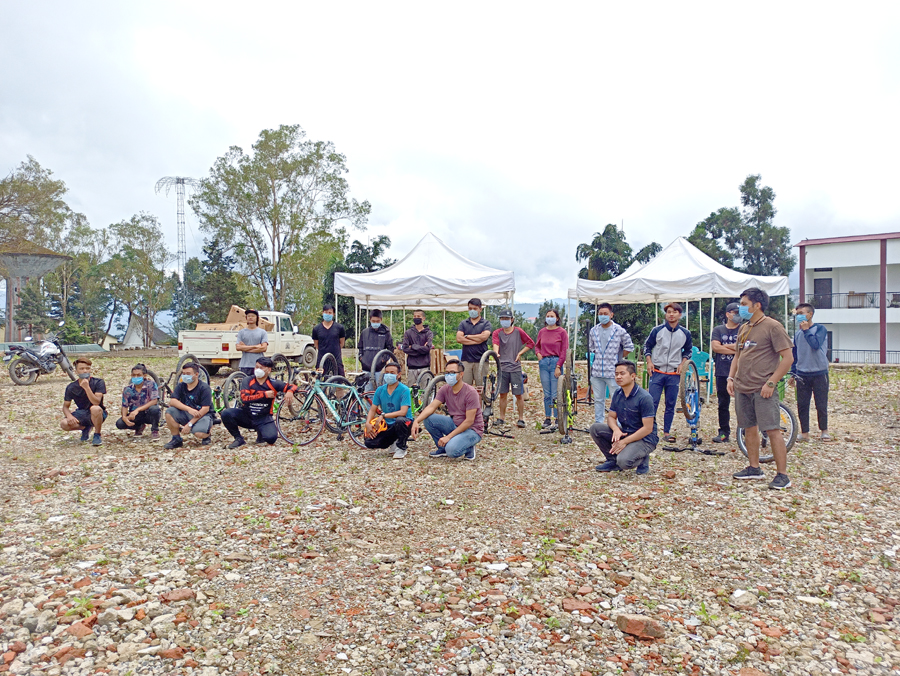 Kohima, August 29: “Being an adventure seeking person and an avid lover of outdoor activities, I’ve always wanted to learn how to ride a bicycle ever since I came across one but I never really had the opportunity to do so until today because most of my life has been confined between schools and hostels, and our family did not have the means to buy one for me back then” says 31-year-old Angke Bosco who participated in the community bicycle workshop organized by Kohima Smart City Development Limited (KSCDL) at Old Assembly Secretariat, Kohima on Saturday.
While giving feedback about the workshop, Bosco commended that the workshop was productive for him because not only was it his first real opportunity to learn how to ride a bicycle but he actually learnt how to ride one. “So, I will definitely purchase a bicycle for myself and if possible join any cycling club as today’s experience gave me a lot of satisfaction and freshness of mind,” Bosco quipped enthusiastically.
The workshop which is in continuation of the Kohima Cycles4change campaign was held with the objective to teach people how to ride a bicycle, become a better rider by interacting with the professional cyclists present at the workshop and also involved the sharing of experiences, tips and tricks among cycling enthusiasts of Kohima.
Nodal officer of the campaign, Atoba Longkumer informed that around 20 people participated in the workshop, with 5 people who were learning to ride a bicycle for the first time.
Also present at the event were Kevilepo, champion of MTB Meghalaya, and champion of 3rd Mokokchung Extreme Downhill Challenge, Tzudiyong Jamir. Professional freestyle bicycle stunt performer, Jami from Tribal Cult imparted the basic knowledge on how to maintain one’s bicycle and the ideal riding posture.
Kohima along with 95 other cities is taking part in the India Cycles4change challenge which is an initiative of the Smart Cities Mission, Ministry of Housing and Urban Affairs, Government of India.
Cities are asked to come up with certain initiatives where they will promote cycling, and based on those initiatives and the draft proposals cities will be awarded points and according to those marking, the top 11 cities will be selected.
Kohima registered for the India Cycles4change challenge on July 25 and the Kohima Cycles4change challenge is being mobilised through the initiative of KSCDL.
(Page News Service)