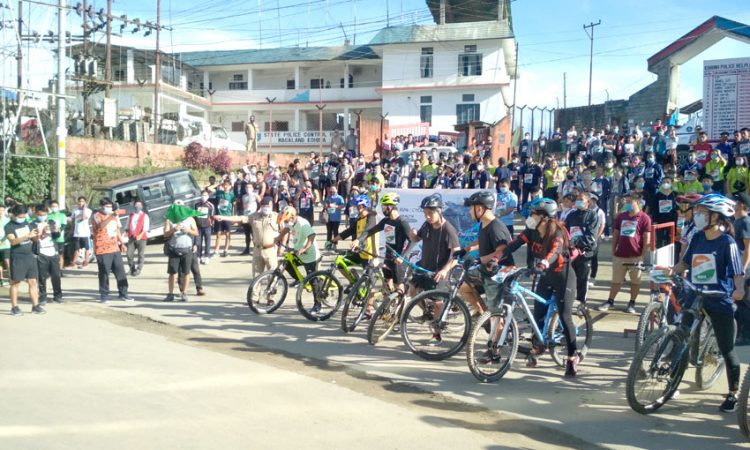 Kohima, July 28: Kohima, along with 10 other cities in India, has been selected as winner of the ‘India Cycles4Change Challenge’, announced today by the Union Secretary for Housing and Urban Affairs, Durga Shanker Mishra, during an online event.

By virtue of being one of the winners, Kohima will receive an award of Rs 1 crore, which will be utilised to scale up the cycling initiatives.
Kohima entered the fray vying for a top spot along with 107 cities across the country last year and through activities such as Bicycle Repair Clinic, Community Bicycle Workshop, construction of Bicycle Pump-Track and development of Cycles4Change App, it made through the screening earlier this year during which 25 cities were selected.
Speaking to Nagaland Page after the results, Technology Officer at KSCDL and the Nodal Officer for the campaign, Atoba Longkumer informed that the challenge was not just activity-based but also an academic exercise as well.
“Lots of documentation needed to be done and some days were really hectic,” he said.
However, now that Kohima has found itself in the winners’ list, he said that the primary focus from now on will be towards community building.
“When it comes to further plans and strategies towards cycling in Kohima, all will be done only after consultations with the stakeholders, i.e., the Nagaland cycling community,” he added.
Entrepreneur & Consultant for Kohima Smart City, Yanpvuo Kikon said: “Bureaucrats and politicians cannot decide on how the vision of cycling should be shaped in Kohima; it’s the boys and the girls from the cycling community to whom we should go and ask them what is their vision for Kohima when it comes to cycling, and accordingly take steps”.
“The vision should be shaped from the bottom up,” he stated.
He further maintained that what most young people in Kohima want is a cycling lane. “Maybe in the main town it is not possible but maybe from Sanoru Bridge to Assembly Secretariat or Thizama,” he suggested.
Cycling lanes can be explored in the areas where the road is big, he added.

Emphasising on the need to create more awareness on cycling around the town, and safety among the cyclists, Kikon shared that the need of the hour is to build more bike parks and skating rinks.
“There are so many skateboarders in Kohima and we have to consider this segment as well,” he added.
“Right now we may not be able to think out of the box, so it is best to go to the stakeholders and ask them what vision they have and what they want when it comes to cycling in Kohima,” Kikon said.
(Page News Service)