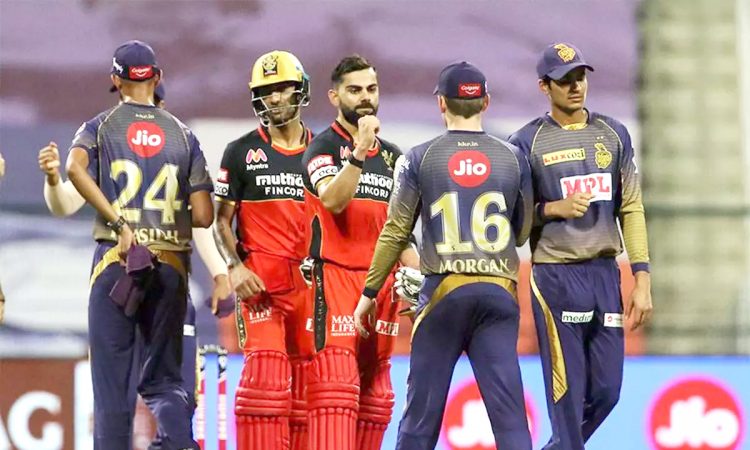 Abu Dhabi, October 21: Mohammed Siraj strengthened his case to get into the flight with the Indian side for the tour of Australia next month with a superb show at the Sheikh Zayed Stadium in Abu Dhabi on Wednesday.
The Royal Challengers Bangalore pacer, returning to the side in place of Shahbaz Ahmed, rattled the Kolkata Knight Riders top order picking up three wickets in his first three overs. KKR skipper Eoin Morgan opting to bat first on winning the toss, backfired as the side fell like a pack of cards to end up
with a paltry 84 for eight in their 20 overs. KKR thus touched a new low of putting up the lowest-ever IPL score by a side without being dismissed.
RCB, who thrashed KKR by 82 runs in their first meeting last week, humiliated them further recording an easy eight-wicket win with 39 balls to spare and leapfrogged Mumbai Indians to occupy the second spot on the points table with a positive net run rate.
Although KKR, playing without their key players both Sunil Narine and Andre Russell for the first time since 2012, still remain in the fray for a playoff berth, but it will be difficult for them to get over this defeat and get the necessary steam to go through the remaining ties.
The Hyderabad lad Siraj, known mainly for his exploits with the red ball, displayed he is no less with the white ball too bowling at the right length and getting to swing the ball too.
Siraj was on a hat-trick in his first over dismissing Rahul Tripathi and Nitish Rana in consecutive deliveries.
He first had opener Tripathi edging an away-going delivery to wicketkeeper AB De Villiers and then bowled Rana with a beauty that cut back through the left-hander’s bat and pad to dislodge the off stump.
Another candidate likely to make the cut for Oz series, Navdeep Saini picked up Subhman Gill in the next over when the opener’s mistimed pull went high up for Chris Morris to take an easy catch running from mid-on.
Siraj then had Tom Banton, who replaced an out-of-form Russell, edging to De Villiers in his next over.
The RCB bowlers’ domination could be fathomed from the fact that they bowled three maiden overs in the Powerplay (first 6 overs) as KKR got their lowest-ever Powerplay score in the IPL managing 17 for 4. Siraj also became the first player to bowl two maidens in one IPL game while Morris and Washington Sundar too bowled one maiden each. Siraj finished his 4-over spell with 3 for 8.
KKR’s last hope faded when Morgan fell for a fighting 34-ball 30, caught at deep mid-wicket boundary by Gurkeerat Singh Mann off Sundar. (TNN)