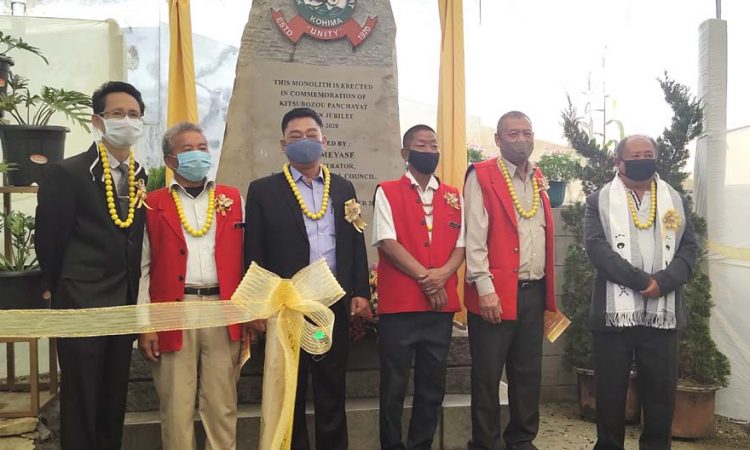 Kohima, November 15: Kitsubozou, Ward No. 5 of Kohima Municipal Council celebrated 50 glorious years of its Panchayat with Administrator of Kohima Municipal Council, Kovi Meyase as guest of honour on Saturday.
In his brief address, Meyase lauded the pioneers and leaders of Kitsubozou Panchayat for carrying forward good work in the colony for the welfare of the people.
In this, he called upon the present generation to contemplate and work towards the kind of legacy they would want to leave behind for the future generation to come who will be celebrating the centenary 50 years from now.

Maintaining that Kohima city has become cleaner and safer beside becoming a smarter city all because of the contributions of the Wards and Panchayats, he said the City is slowly moving out of the unwanted tag of second most unlivable city in the country. He said while there are over 4400 cities, Kohima is fortunate to be among the hundred cities being selected under Smart City Mission. He expressed hope that this would further improve the city condition.
Therefore, the KMC administrator and CEO Kohima Smart Development Corporation Ltd sought the cooperation and support of the wards and panchayats towards uplifting the indices of the capital city.
He said under the Smart City Mission, Kohima is slowly but surely inching towards becoming a Smarter City.
Mere building or constructing infrastructures does not make a city smart but that is the citizens who make the city smart, he said, adding that smartness is not equated to brands and bright lights alone but more with the character, attitude and behavior of the citizens.
As citizens of the aspiring smart city, Meyase opined that “we ought to strive further on towards living up to the pinnacle of smartness”.
“If we want to be a permanently smart city it depends on the attitude of the individuals towards taking up their duties and responsibilities and not just demanding for their rights. If we fulfill our responsibility then the city will see not only smarter development but have smarter citizens,” he said.
The KMC Administrator implored upon the Panchayat to take the onus of nurturing citizens in their respective communities.
“Let us be willing to see through our shortcomings and failings, if any, during the course of this 50 years journey and rededicate ourselves to leaving a legacy of hope for our citizens and our community,” said Meyase.
Earlier, Meyase unveiled the jubilee monolith erected outside the Panchayat Hall and also released the souvenir and memento.
Medo Yhokha, the newly elected MLA of 14-Southern Angami-I Assembly Constituency, under which Kitsubozou falls and Seyievilie Peter Zashümo also spoke on the occasion and extended greetings to the colony panchayat.
Taking the opportunity, both of them also thanked the electorates of the colony for their support and cooperation during the November 3 bye-election.
Maintaining that golden jubilee is a time for reconciliation, both Yhokha and Zashumo asserted to work for the general welfare and uplift of the people of the colony.
Organising Committee member and former chairman of Kitsubozou Panchayat, Sasevoto Rote and Assistant Head GB Kitsubozou Vituozo Kire also delivered short speeches.
Chaired by Kitsubozou Panchayat chairman and convener organizing committee, Mezhüvilie Bio the celebrations started with Senior Pastor of Chakhesang Baptist Church Kohima Rev Dr Kewekhalo Lasuh pronouncing invocation. Finance report was presented by Convenor Finance Committee Vimhalie Pienyü while Vice chairman R. Reilie Sorhie delivered the welcome address and former vice chairman Khrieketou Yano tendered the vote of thanks. (Page News Service)