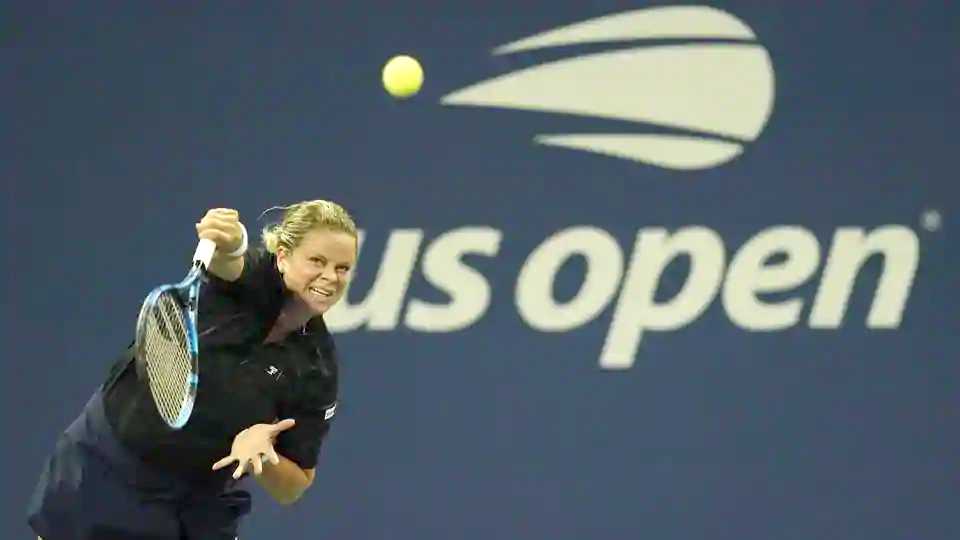 Kim Clijsters, of Belgium, serves to Ekaterina Alexandrova, of Russia, during the first round of the U.S. Open tennis championships, Tuesday, Sept. 1, 2020, in New York. (AP)

New York, September 2: Mounting a comeback at the U.S. Open, Kim Clijsters fell victim to one.
The three-time champion powered her way to an early lead but couldn’t hold it, and Russian Ekaterina Alexandrova rallied Tuesday night for a first-round victory, 3-6, 7-5, 6-1.
It was Clijsters’ first match at a Grand Slam tournament since 2012, when she retired after the Open. Now 37, the mother of three and a member of the International Tennis Hall of Fame, she has decided to resume her career this year but is 0-3.
“It’s a process,” she said. “That’s what I told myself at the start when I took this challenge on — that it’s going to take a lot of hard work and losses.”
Clijsters said she trained hard for the Open and was excited to play, even with no fans in the stands because of the coronavirus pandemic. She has been hampered this year by injuries, most recently an abdominal ailment, but said they weren’t an issue against Alexandrova.
Instead, the problem was Alexandrova, a tour veteran ranked 29th.
“She started serving a lot better, I felt,” Clijsters said. “In the third set I just felt like she was seeing the ball very well and hitting her targets all the time.”
The atmosphere was much different than at the Open in, say, 2005, or 2009, or 2010. Clijsters won the title each of those years. She also won the 2011 Australian Open and is a former world No. 1.
There were no fans to offer encouragement when Clijsters let the second set slip away, or as she faded at the end. One pivotal stat: She won only three of 15 break-point chances.
But Clijsters said she felt good about the quality of tennis. She dominated from the baseline in the early going, was effective at the net and ranked the performance overall as her best this year.
“That’s the most positive thing about it,” she said. “You look at a loss in a little bit more of a mature way than maybe 10 years ago.” (AP)