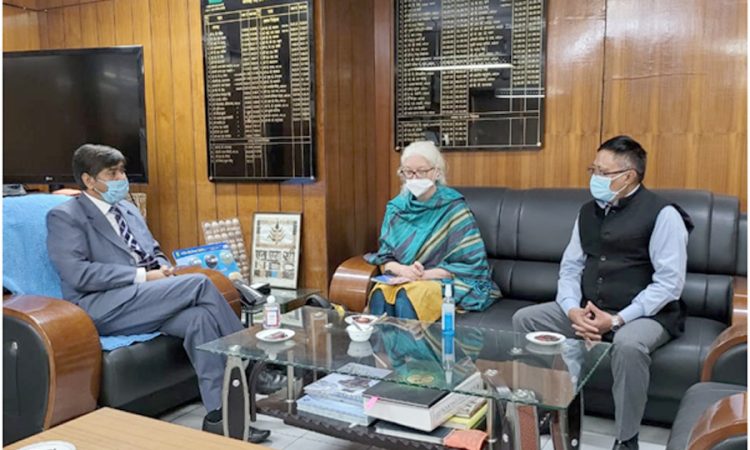 They interacted with the Chairman, officials and scientists who highlighted to them about variety of seeds and its quality available at the Corporation, which are not only cheap but among the best in the country. The Corporation which distributes seeds to almost all the states in the country also took the visiting officials for laboratory and seed packing inspection and presented power point presentation.
The Corporation’s Chairman informed that states like Karnataka J&K and Odisha have signed MoU with the Corporation highlighting their requirement of seeds during the next few years. The Chairman also highlighted other activities of the Corporation to the visiting duo.
During the interaction, Kikheto appreciated the yeoman services rendered by the Corporation which is a GoI undertaking. Kikheto said most of the hilly states particularly Nagaland has its own indigenous seeds preserved by the respective tribes according to the climate and topographic locations.
He informed that women have been the best seed keepers/preservers in Nagaland but the practice has been gradually vanishing owing to import of seeds from outside the state and also due to the reduced practice of farming activities.
“Resultantly, our original food produce and crops are vanishing and is slowly being overtaken by non-indigenous seeds and its produces. Therefore, in order to preserve our indigenous seeds which are 100% organic, we are here to see if any seed bank could be set up in Nagaland,” the APC said during the interaction.
Responding to this, Vinod Gaur said setting up individual seed bank in a single state or even the entire NE states was not feasible and viable since the Corporation alone cannot do it and has to be outsourced. Gaur, however, said if Nagaland asks the Corporation to preserve and develop seeds for the state then it could work out accordingly.
Although the main purpose of Kikheto’s visit was to explore possibility of setting up seed bank in the state, after non-feasibility issue was expressed, the APC said since preservation of indigenous seeds was of utmost importance, he would discuss with the officers and identify which seeds are to be preserved.
“Most of our seed keepers are decreasing and likewise indigenous seeds are also vanishing so we will give you our seeds to preserve and also for you to develop,” the APC added.
“Since the vanishing indigenous seeds is a huge concern, even if seed bank is not viable in our state, we will continue to coordinate with you and let you preserve and develop the seeds to stop indigenous seed extinction,” Kikheto said.

As far as FOCUS (Fostering Climate Resilient Upland Farming Systems) Project under IFAD (International Fund for Agriculture Development) is concerned, both the Country Director and APC talked about possibility of signing MoU with the Corporation and to buy directly from it to get better quality which will in turn help the farmers. They agreed in principle to buy seeds from the Corporation for the next khariff season for Nagaland.
Vinod Gaur expressed delight at the visit of the Country Director and APC and both the parties agreed to work together in future towards the cause of the farmers especially in seed preservation.
(Page News Service)