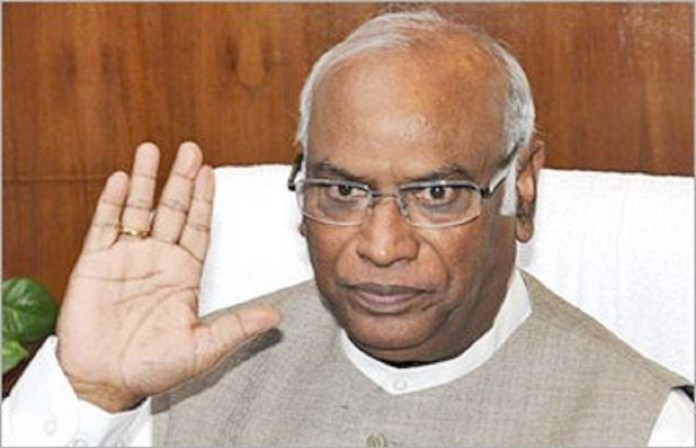 New Delhi, March 1: Congress leader Mallikarjun Kharge has declined Prime Minister Narendra Modi’s invitation to attend the Lokpal Selection Committee meeting taking strong objection to the ‘special invitee’ status that would not allow him to contribute to the discussion.
Modi had called a meeting of the Lokpal Selection Committee comprising Chief Justice Dipak Misra, Lok Sabha Speaker Sumitra Mahajan and Kharge to select an ’eminent jurist’ as a member on the panel.
“…I must respectfully decline the invite as ‘Special Invitee’ to uphold the inviolability of the Lokpal Act, 2013 as the current proceedings have reduced the sacred procedure to a political pretence,” Kharge said in a letter to the Prime Minister dated February 28.
Kharge said asking him to be a special invitee at the meeting was against the Lokpal and Lokayuktas Act, 2013 as the objective of the law reflected that the leader of the opposition could not be substituted as a special invitee.
“A more apt and statesman-like conduct is expected from the prime minister of the country,” the Congress leader said in a two-page letter.
Kharge said his presence at the meeting as special invitee without rights of participation, recording of his opinion and voting would be a mere eyewash ostensibly aimed at showcasing the participation of the opposition in the selection process.
He said the ‘Special Invitee Invitation’ was a concerted effort to exclude the independent voice of the opposition altogether from the selection process of the most important anti-corruption watchdog.
The government had told the Supreme Court last month that the process to select the Lokpal has been set in motion and a meeting of the Selection Committee was scheduled on March 1. (Agencies)

Govt must come clean on border standoff with China: Rahul

SC directs states not to charge fare from stranded migrant workers, to be provide food, water

Identify private hospitals to treat COVID-19 patients for free or at nominal cost: SC to Centre

SC issues notices to Centre, Assam on plea against delimitation process based on 2001 census

Mystic who claimed to have survived without food, water for 76 years dies

To whom it may concern

CS seeks report on absence of district head of offices