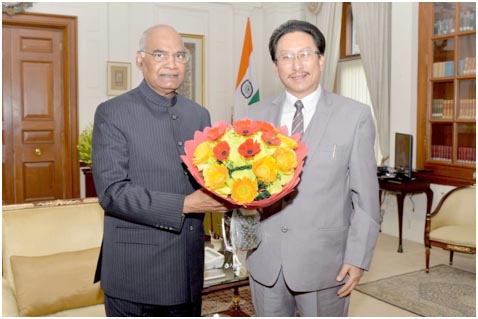 Dimapur, December 21: Member of Parliament, Rajya Sabha, KG Kenye has sought the consent of the President of India to repeal Arm Force Special Powers Act (AFSPA) from Nagaland.
“In the year 1948 this AFSPA which is considered as “Draconian Law” was discussed in the Universal Declaration on Human Rights with the members of the United Nations which is popularly known as Geneva Convention and declared not to formulate this kind of Act where India was one of the signatories. However, after ten years of the declaration, the India government has promulgated this Act upon the State of Nagaland against its own citizens which is being enforced till today,” said Kenye in a meeting with the President of India, Ramnath Kovind at New Delhi recently.
On Article 371(A), the MP lamented that the Centre is not implementing Article 371 (A) in letter and spirit and sought the intervention of the President to allow the State to explore its own natural recourses especially oil and natural gas as Nagaland is economically very weak.
The MP also reiterated that in the year 1972 the Zonal Council was dissolved and the North East Council was constituted as a direct consequence of Bangladesh partition whereas the entire region is extremely sensitive and strategic area of the nation. “Taking into account the 1945 II World War, 1962 Chinese aggression and 1971 East Pakistan war wherein the battle ground was exclusively within the boundary of Eastern Region also compounded with the fact that this region is bounded by 5 countries. Therefore a separate and Administrative Centre has to be established because of the distance with the national capital and also in order to accommodate an appropriate platform for Nagaland which was under External Affairs Ministry from 1960-72,” he said.
Kenye was of the view that far from downgrading NEC into a research institute, which, he said, will completely defeat the original policy of the Centre, it should be upgraded in every aspect and the council should be strengthened for better administrative and general development programmes for the region.
The MP raised this in view of the geo-political aspect taking into account the South and South East Asian wave which is currently passing through this strategic region, said a release issued by Kuvera Nakro, PRO to the MP.
On the Indo-Naga political problem, Kenye said the talk is now gaining momentum and more participation. He urged the Government of India to seize the opportunity to bring about an honourable and acceptable settlement to avoid further bi-products which has the potential to over shadow the main issue.
The MP also requested the President to take up with the Government the state of the art international airport in Nagaland, to which the President assured the MP to consider the proposal on priority. (Page News Service)