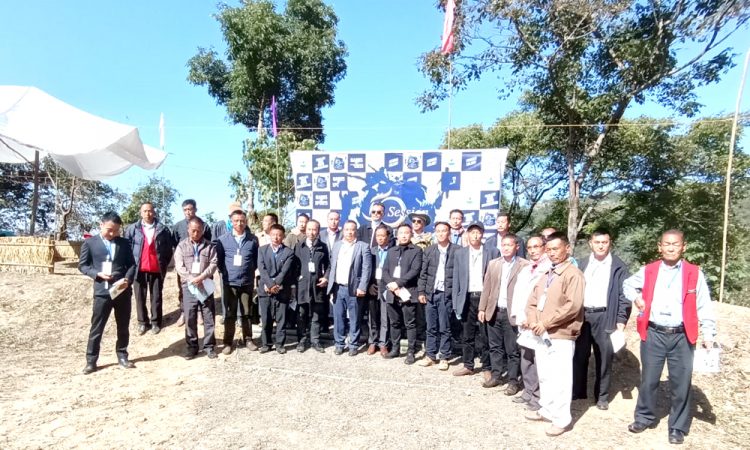 Special guest along with village leaders during the 50 th KYO (games and sports) in Khulazu Basa village.

Dimapur, November 24: The Khulazu Basa Youth Organisation (Games and Sports) celebrated its 50th golden jubilee at Khulazu Basa village’s local ground, under Phek district, on November 24.
The four-daylong sport event will culminate on November 27 with the youth participating and competing for different games and sports. The first day commenced with athletic events.
Joint Secretary of Soil and Water Conservation, Tsobahu Rhakho, unveiled the monolith of the 50th anniversary. Speaking on the occasion, he urged the youth to be determined and work hard in whatever profession they are into. He also emphasized on the importance of dignity of labour and encourages them to take up any sort of jobs, be it small or big.
Velukho Rhakho, state former footballer, shared his experience on the occasion. According to him, there is a wide scope in games and sports profession. He encouraged interested youth to pick up sports of their interest and work hard to achieve their dreams.
He also added that different games and sports are now being introduced as part of the curriculum activities in many educational institutions.
President of Chokri Area Games and Sports Association, Vekhayi Rüho, in his address reminded that physical feature is not the only criteria to excel to excel in sports exemplifying Sachin Tendulkar who has dominated thye world of cricket despite being a short stature player.
He said that the Board of Control for Cricket in India (BCCI) is in promotion for the game of cricket in the country and that the developmental process of the sport cricket is underway in Phek under the initiative of Phek District Cricket Association (PDCA). Rüho asked the participants to opt for the game of cricket the development of the sport cricket is in progress in the district Phek under (PDCA) headed by its president Vezokho Chotso.
The president urged the players to abstain from taking intoxicant substances which has ‘disastrous consequences’ to hamper their career.
It may be mentioned that the organisation was founded during the conflicting period between Indian Army and Nagas, where the youth felt the need to protect its people from harm.
(Page News Service)