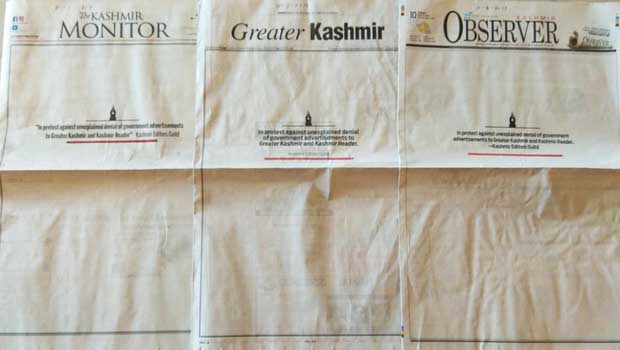 SRINAGAR, MARCH 10: Most of the leading dailies in the Kashmir valley printed a blank front page on Sunday as a mark of protest against the “unexplained denial” of advertisements to 2 newspapers by the Jammu and Kashmir Government.
The Kashmir Editors’ Guild (KEG) had claimed last month that the state Government had stopped giving advertisements to 2 major dailies ~ Greater Kashmir and Kashmir Reader.
“With utmost regret, the Kashmir Editors’ Guild wishes to inform that the Jammu and Kashmir Government has stopped state Government advertisements to 2 major daily newspapers ~ Greater Kashmir and Kashmir Reader,” it had said in a statement, adding that the decision was neither conveyed formally nor was any reason detailed to the respective publications.
As a mark of protest, the leading dailies here ~ both English and Urdu ~ printed a blank front page on Sunday.
The front pages of these newspapers only carried a message from the KEG ~ “In protest against the unexplained denial of Government advertisements to Greater Kashmir and Kashmir Reader.”
A spokesperson of the KEG said the guild and the Kashmir Editors’ Forum had on Saturday taken the decision to print a blank front page against the Government’s move “to scuttle” the media in Kashmir.
He added that the Guild would also hold a protest at the Press Club here on Sunday afternoon against the Government decision. (PTI)