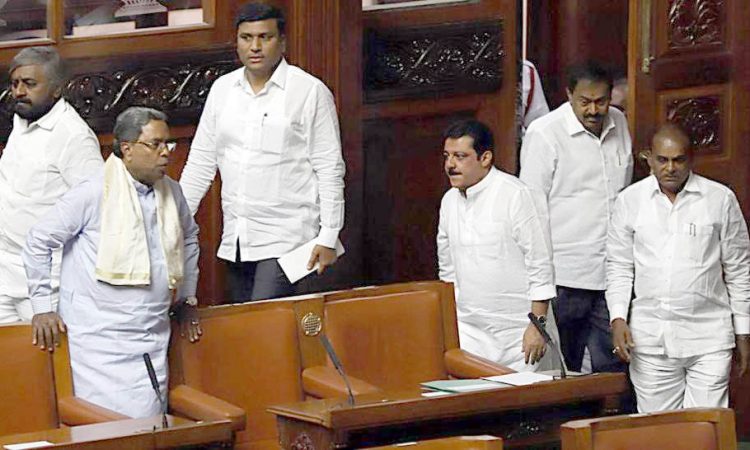 New Delhi/Bengaluru, July 12: In a breather for the beleaguered JD(S)-Congress government in Karnataka, the Assembly Speaker was restrained by the Supreme Court till Tuesday from deciding on both the resignation and disqualification of rebel MLAs, as Chief Minister H D Kumaraswamy in a surprise move Friday announced he would seek a trust vote.
As Karnataka is headed for a prolonged political uncertainty, BJP sources said the party too has decided to move its MLAs to a resort near Bengaluru amid fears of reverse poaching by the ruling combine after Kumaraswamy’s announcement. The JD(S) MLAs have been also put up in a resort near Bengaluru.
The court yesterday directed the Speaker to take a decision “forthwith” on the resignation of the 10 rebel Congress and JD(S) MLAs but Speaker K R Ramesh Kumar later said more time is required for a decision. The Congress had also initiated disqualification proceedings against its rebel MLAs. In all, 16 Congress and JD(S) MLAs have submitted their resignations.
The ruling coalition’s total strength is 116 (Congress-78, JD(S)-37 and BSP-1), besides the Speaker.
With the support of the two independents, who Monday resigned from the ministry, the BJP has 107 MLAs in the 224-member House, where the half-way mark is 113.
If the resignations of the 16 MLAs are accepted, the coalition’s tally will be reduced to 100.
Citing “weighty issues that have arisen”, an apex court bench headed by Chief Justice Ranjan Gogoi and also comprising Justices Deepak Gupta and Aniruddha Bose said the matter will be considered by it on July 16 and status quo as of Friday should be maintained.
The bench specifically mentioned in the order that the Speaker would not decide on the issue of the resignation or the disqualification of the rebel MLAs to enable the court to judge the larger issues raised during the hearing of the matter.
The bench noted in its order that the issue of maintainability of the rebel MLAs’ petition under Article 32 of the Constitution was raised by the speaker and Kumaraswamy.
It said senior advocate Mukul Rohatgi, appearing for the rebel MLAs, countered the speaker’s submission that the disqualification plea of the ruling coalition in the southern state had to be decided before taking up the issue of resignation of the lawmakers.
Taking all these aspects and the incomplete facts before it into consideration, there was a need for further hearing, it said.
“In view of the weighty issues that have arisen, we are of the view that the matter be considered by us on Tuesday. We are of the view that the status quo as of today with regard to the prevailing situation be maintained. Neither the issue of resignation nor that of disqualification be decided till Tuesday,” the bench said.
Rohatgi alleged that the speaker has not decided on the resignations of the lawmakers and the idea behind keeping the issue alive and pending was to bind them with the party whip.
He said the speaker questioned the MLAs’ move to approach the apex court and asked them to “go to hell” in front of the media.
“Speaker can be given one or two days to decide on the issue of resignations. If he still does not decide, contempt notice can be issued against him,” Rohatgi said.
The bench asked if the speaker had the power to challenge the Supreme Court’s order. It posed the question when senior advocate A M Singhvi, appearing for Kumar, said the assembly speaker also held a constitutional post and was obligated to decide on the disqualification as well.
“I am constitutionally obligated to decide on the plea for disqualification of MLAs also,” Singhvi said.
“Speaker is a very senior member of the assembly and he knows the constitutional law. He can’t be maligned and lampooned like this,” he added.
Singhvi, also a Congress leader, said the speaker was “duty-bound and empowered” to decide the issue of disqualification of the rebel MLAs first.
Senior advocate Rajeev Dhavan, appearing for the chief minister, said the apex court had passed an “ex-parte” order without issuing notice to the speaker.
Several corruption allegations against the state government have been levelled in the plea of the rebel MLAs while securing a judicial order, Dhavan said. One of the rebel MLAs was involved in a Ponzi scam for which the government is being accused, he added.
“Speaker has the responsibility to satisfy himself that resignations were voluntary… The Supreme Court order was passed without hearing the other side, what can the speaker do in such a situation,” said Dhavan.
As his government teetered on the brink, Kumaraswamy announced he would seek a trust vote and sought time from the Speaker.
The surprise announcement from the embattled chief minister came in the state Assembly, which commenced its 11-day session in the backdrop of the resignation of the 16 ruling coalition MLAs, which now threatens the government’s survival.
However, the opposition BJP took exception to the Chief Minister raising the matter during obituary reference.
The chief minister said he had taken the decision on the trust vote “voluntarily.” “The ongoing political developments, this confusion has been created due to the action of some MLAs. I am ready for everything. I am not here to stick on to power,” he said.
Speaker Kumar said a slot would be allotted whenever the chief minister opted for it.
“The chief minister has spoken his mind that he would not cling to power amid the confusion. He said he will seek the trust of the House,” he told reporters.
“Whenever he tells me that he wants to move the trust motion, the very next day I will put it in the business of the day.” (PTI)