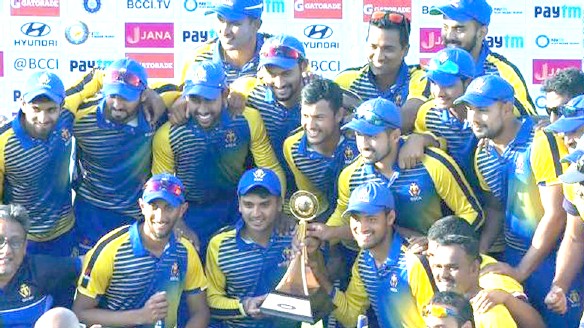 NEW DELHI, February 27: From the moment he smashed an exquisite cover drive off the very first delivery of the match bowled by Saurashtra’s Jaydev Unadkat, it was more or less clear that Karnataka opener Mayank Agarwal was ready for another big one.
It was the final of the Vijay Hazare Trophy but Mayank showed no nerves and with the Karnataka players being used to playing such games, they had the last laugh at the end of the day. Saurashtra, who had hoped to pull off an upset win, lost the match by 41 runs at the Feroz Shah Kotla Stadium, here on Tuesday.
This is Karnataka’s first domestic trophy of the season after having lost out on the Ranji Trophy and Syed Mushtaq Ali Trophy.
Asked to bat first, Karnataka failed to last their full quota of overs as they were bowled out for 253 in 45.5 overs. However, the total proved quite a handful for Saurashtra, who in reply, folded up for 212 in 46.3 overs.
Saurashtra had a bright start to the day as they were able to send back two of Karnataka’s accomplished batsmen with just five on the board. Skipper Karun Nair and KL Rahul fell without troubling the scorers in the third over of the game. However, Mayank, who has been in sublime form this season, never let those setbacks affect his game. He and Ravi Kumar Samarth (48) got the innings back on track with a 136-run stand for the third wicket before he fell.
Mayank’s dominating innings of 90 off just 79 balls was studded with 11 fours and three sixes. He was in such good knick that even a mistimed shot went over the boundary. It was unfortunate that he fell 10 short of what would have been another well-deserved century. After Mayank’s departure, the Karnataka batsmen failed to build on the foundation. Pavan Deshpande (49) and Shreyas Gopal (31) took the score beyond the 250 mark.
Off-spinner Makvana bagged four wickets for 34 but India’s T20 player Unadkat went wicketless.
Saurashtra too didn’t get off to a good start but skipper Cheteshwar Pujara did light up the day after a cautious start to get close to the opposition total with some lusty hits to come up with a brave knock. Pujara shared a 65-run stand for the ninth wicket with Kamlesh Makvana, but in the end, it wasn’t enough. Pujara’s 94 came off 127 balls and had 10 fours and a six. (TNN)