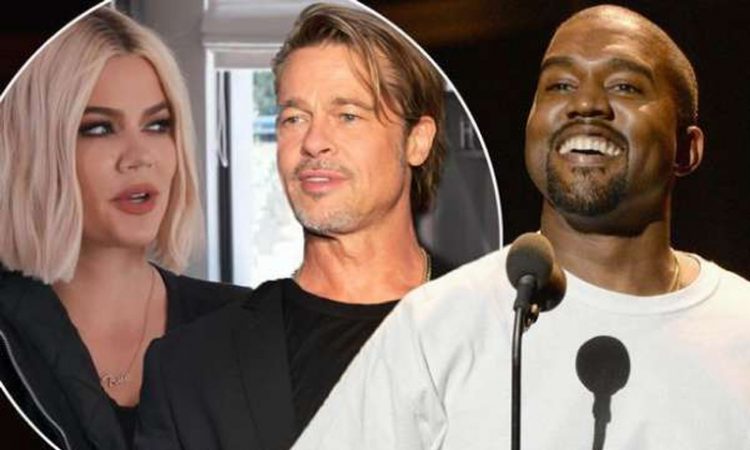 Kanye West is a legendary rapper and producer – but now he may be turning his eye to something more romantic.
Rumour has it that the hit-maker might be trying to set up sister-in-law Khloe , sister to Kanye’s wife Kim Kardashian , with movie superstar Brad Pitt .
He hosted Brad at his Sunday Service, alongside Khloe, as well as her sisters Kim, Kendall and Kourtney.
Khloe, 35, has never hidden her crush on Brad, 55, even admitting live on radio once that she would have sex with him on air.
She told host Howard Stern: “Bring in Brad Pitt and I’ll f*** him on air.”
Khloe added that she thinks he’s “really good looking.”
Later she admitted on her website that she thought he was “handsome” after Brad split from then-wife Angelina Jolie .
She wrote on her website: “I love him [but] I didn’t like him when he was super young, like in Thelma & Louise.”
Khloe’s also felt heartache of her own, after she split from Tristan Thompson earlier this year, with whom she shares daughter True, born last year.
Tristan kissed Jordyn Woods , 21, who also happened to be the best friend of Kylie Jenner , Khloe’s sister. Jordyn was soon shut out of the Kardashian clan inner cicle.
Now it seems possible Khloe might find love again with handsome Brad.
Kanye’s Sunday Services are known to often be star-studded affairs, including the likes of Katy Perry and Orlando Bloom .
Brad seems to have made a particularly good impression, though, after he was spotted with Kim and Kanye at a Hollywood bash.
He’s battled with demons recently, having spent 18 months in Alcoholics Anonymous following the break up of his marriage to Angelina.