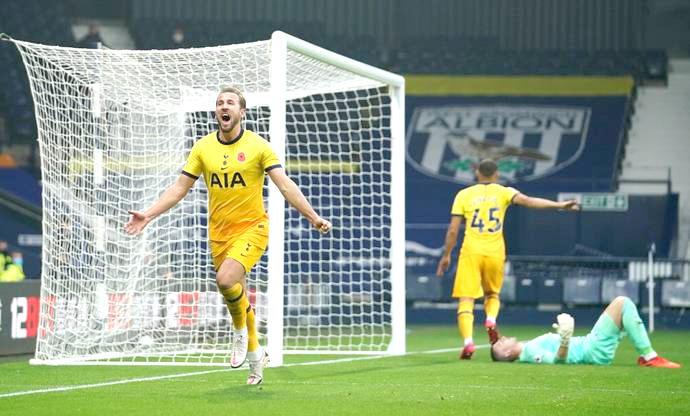 Harry Kane celebrates after scoring the winner in Tottenham Hotspur's victory over West Brom in the Premier League on Sunday. - REUTERS

LONDON, November 8: Harry Kane’s late header earned Tottenham Hotspur a 1-0 victory at struggling West Bromwich Albion on Sunday and took the London club to the top of the Premier League table.
It looked as though Tottenham had been frustrated by a resolute West Brom side, but in the 88th minute Matt Doherty floated a ball forward and Kane glanced it into the net.
Tottenham manager Jose Mourinho had started the attacking trio of Kane, Gareth Bale and Son Heung-min together for the first time in a league game but they were well shackled by the hosts.
Tottenham failed to even test West Brom keeper Sam Johnstone for almost an hour at the Hawthorns but showed more urgency late on and were finally rewarded as Kane delivered again.
Tottenham’s third successive league win took them top with 17 points from eight games, although Liverpool will dislodge them if they beat Manchester City later on Sunday.
West Brom are still without a league victory this season and remained third bottom of the standings.
Vardy penalty sends Leicester top with narrow win over Wolves
Leicester City went top of the Premier League with a tense 1-0 win over Wolverhampton Wanderers on Sunday in which striker Jamie Vardy scored one penalty and had another saved.
Vardy made no mistake with his first spot-kick in the 15th minute after Wolves were penalised for handball, but just before halftime he struck his second straight down the middle and into the legs of Rui Patricio after Rayan Ait Nouri brought down James Justin.
There were late chances for both sides as Leicester goalkeeper Kasper Schmeichel pulled off a stunning save to deny Ruben Neves and Harvey Barnes blazed a late deflected shot over the bar at the other end.
Leicester climbed to the top of the table with 18 points from eight games, one ahead of Tottenham Hotspur and two clear of champions Liverpool who play Manchester City later on Sunday. (Reuters)