HomeInfotainmentKajol had a crush on Akshay Kumar, Karan Johar reveals on The Kapil Sharma Show
Infotainment
2 years agoApril 28, 2019No tags 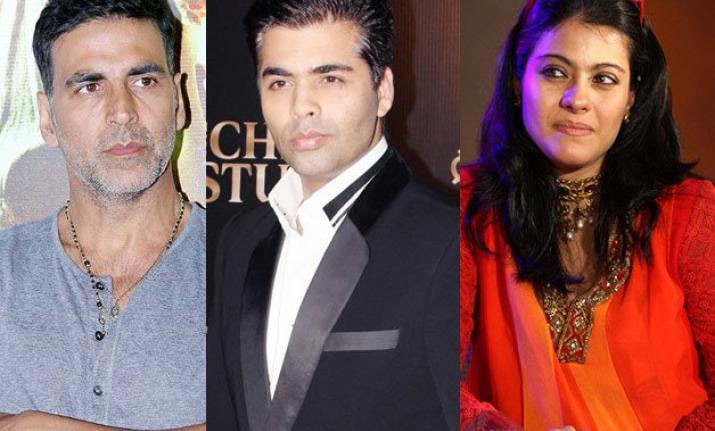 Bollywood actor Kajol had a crush on Akshay Kumar, filmmaker and Kajol’s close friend Karan Johar revealed on a recent episode of The Kapil Sharma Show. In the fun-filled episode, the Bollywood friends talked about how they met for the first time and shared memories of industry parties.
“I met Kajol at another party, at the premiere of Henna movie. Kajol had a big crush on Akshay Kumar and was looking for him at the entire premiere and I was her support then. So both of us were looking for him at the entire event. While we didn’t find Akshay, but it was the beginning of our friendship. Both of us stayed in South Mumbai and that’s where our friendship developed further,” Karan said. Akshay and Kajol worked together in Yeh Dillagi.
Karan also revealed that Kajol never remembers his birthday, “We have been friends for so long, but she never remembers my birthday. She will either call a day in advance or a day later, but never on my birthday.” On a serious note, Karan also praised her for maintaining relationships.
Kajol also revealed what happened when they first met, “It was film party at a discotheque. Mr Johar arrived in a three-piece suit and I just couldn’t stop laughing, wondering what kind of a man wears that!”
Insisting that all her recollections were wrong, Karan said, “I was just 17 years old and opted for a suit, thinking that people are all dressed for a filmy party. Tanu aunty (Kajol’s mom, Tanuja) suggested that we dance, while I am doing my dance, Kajol is just laughing at me, for almost half an hour! Who does that! I felt so humiliated, I walked out of the party as I have never felt so insulted in my life.”
Kajol also revealed that her father wanted to name her ‘Mercedes’ .“My father wanted to name me Mercedes. He thought that if a person can start a company by his daughters’ name, then why can’t I name my daughter that,” she said.