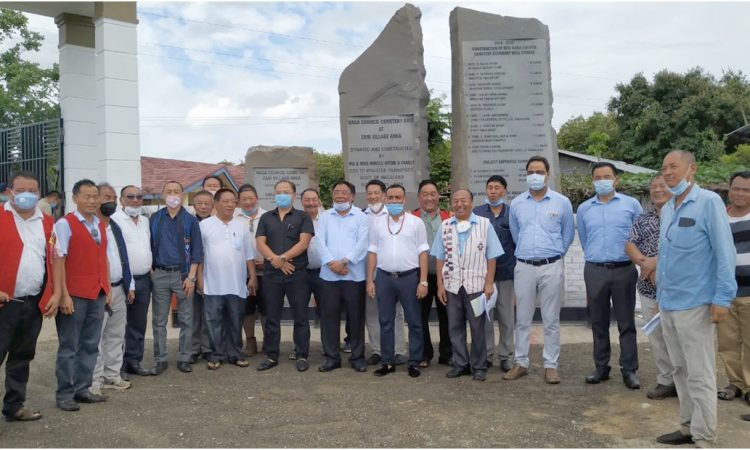 Dimapur, July 1: Minister for Agriculture and Cooperation, G Kaito Aye on Wednesday called upon the Nagas to get united and weed out elements of corruption in the Naga society, while at the same time commented that while Nagas get the blame for anti-social activities, it is also a fact that there are many outfits that enter Nagaland from other states and carry out such activities, distorting the image of Nagas.
He said this during the inauguration of the New Naga Cemetery at Zani Village, Dimapur, which is estimated to accommodate about 10,000 graves.
Mentioning that the “Governor is writing letters to Chief Minister”, Aye in his speech asked the Naga Council Dimapur to be stronger and louder against anti-social elements and know that the government is there to help. He said that Nagas need to unite so that outsiders may not point out disunity among the Nagas. He said it is when Nagas are united that all things can be done.
“Let’s wake up and remove what is wrong,” he said, calling for creation of a Nagaland which is free from corruption, extortion, and free for public to move anytime.
Inaugurating the cemetery, the minister said that a place for the dead has been made, and it is time to make a place for the living.
He assured the Naga Council Dimapur that he would take care of the expenses of the beautification of the Chapel Hall of the cemetery as well as speak on behalf of the Nagas to the government to make proper roads leading to the cemetery.
H Tovihoto Ayemi, MLA and Advisor, Department of Power in his speech said that the cemetery was a long cherished dream and a need as the old Naga Cemetery at Khermahal has been exhausted and there were instances when new graves had to be made atop the old ones.
He said that while the cemetery would accommodate any death caused due to coronavirus, he would pray that no such death should occur and there are many things that need to be done for which everyone needs to come together.
Ayemi said that coronavirus is taking a toll with thousands of deaths each day, but fortunately the state has till now not recorded any death and the government is trying its best to prevent and contain the virus. He assured that the state would battle it out no matter how long it takes. He also appreciated the contributions of the civil societies and NGOs in the fight.
He said that while the virus would go, whatever the positive aspects that is brought by it, should stay.
DC Dimapur Anoop Khinchi who was also present during the ceremony said that he is glad that the site got inaugurated during his tenure.
Earlier, giving a brief report on the cemetery, NCD vice-president and convenor of New Cemetery Development Project, K Ghokheto Chophy said that the length and breadth of each burial will be 3×7 feet, the height of burial dug should be six feet from the ground level, tomb construction shall be allowed only upto one feet above the ground level, and each tomb site shall have an interval of one feet from both sides.
He said that one block has been reserved in case of any COVID-19 causalities and added that public in general would not be allowed to bury at least for two or three months as it is yet to be designed.
President of Naga Council Dimapur, Bangerloba in his speech showed his gratitude towards the various individuals who contributed towards it as well as gave a brief history of its development.
The plot, measuring 18 bhigas was purchased by Chief Minister, Neiphiu Rio in 2005 and the burial chapel was constructed in 2008 using the donations of Sethi & Sons. Chowkidar house, power line connection, and transformer installation fund was sanctioned to the tune of Rs 10 lakh by then Chief Minister, T R Zeliang in 2015. Former DC Dimapur, Kesonyu Yhome also sanctioned Rs 1 lakh towards it.
However, due to financial constraint for major infrastructural development, there was delay in constructing and maintaining the cemetery. Consequently, Rs 55 lakhs was collected from donors including Minister for Agriculture G. Kaito Aye, Minsiter for Transport P. Paiwang Konyak, Minister for Rural Development Metsubo Jamir, Minister for Tribal Affairs Temjen Imna Along Longkumer, Advisor Power H. Tovihoto Ayemi, DGP Nagaland T.J. Longkumer, CNC Naga Army H. Samson Ayemi, Entrepreneur Mangilal Jain & Sons, and OSD to Minister Transport, Niholu Ayemi.
The construction was, however, put on hold due to nationwide lockdown. On 25 April, Government of Nagaland in a meeting held at Hotel Saramati advised Naga Council to complete the cemetery work within one month pertaining to COVID-19 burial case and thus the remaining construction work was completed though there still is much to be done. (Page News Service)