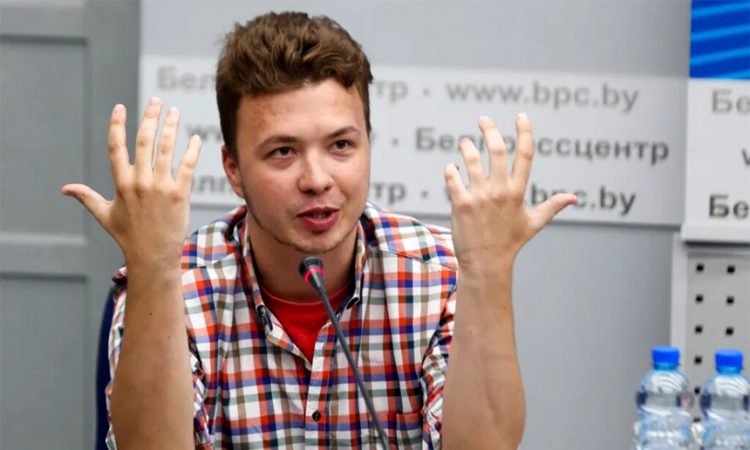 MOSCOW, JUNE 16: He faces more than a decade in a grisly Belarusian prison for his political activities, but on Monday, Roman Protasevich took a seat beside Generals at a news conference to voice admiration for the authoritarian leader of Belarus, a country that declared him a terrorist.

Protasevich, who was dragged off a Ryanair flight along with his girlfriend, Sofia Sapega, 3 weeks ago by Belarusian security agents, arrested and thrown in jail, made the comments after walking into a room packed with reporters.
“I understand what kind of damage I have inflicted not only on the state but on the country”, he said during the news conference. “Today, I want to do everything to correct this situation.”
Protasevich, who since his teenage years was an avowed opponent of the Government, said he had not been coerced into reversing his dissident stance, and he praised the country’s strongman leader, Aleksandr G Lukashenko.
He appeared nonchalant or tried his best to show no outward sign of duress. He wore civilian clothes and sat calmly beside the Generals as cameras rolled. The news conference had not been announced beforehand.
Raw, often chilling videotaped confessions by jailed dissidents are common in Belarus, but they tend to be disregarded outside the country because they appear to be made under duress.
Protasevich made a similar statement when he was paraded before reporters within days of his arrest, though he was more obviously under duress and bruises were visible on his arms during that first appearance. Family members said that the earlier statement had been coerced.
Members of the Belarusian opposition said Protasevich’s appearance on Monday was also made under duress. In protest, journalists from the BBC walked out of the news conference, at which Belarusian authorities had promised to provide new details in their story of how and why the Ryanair flight was forced to land after entering the country’s air space on a flight to Lithuania from Greece.

“No matter what he says, let’s not forget: he is a hostage”, Franak Viacorka, a prominent Opposition activist who is now living in exile, wrote on Twitter, adding, “This is not a press conference but a scene of either Kafka or Orwell.”
Sitting next to Dmitri Gora, the head of the country’s top investigative agency, Protasevich said that he “understands what crimes” he will have to respond to. Charged with the incitement of public disorder and social hatred, Protasevich could spend more than a decade in prison if convicted.
Only a few weeks ago, Protasevich, 26, described the Belarusian strongman leader as “a dictator”. (NYTNS)