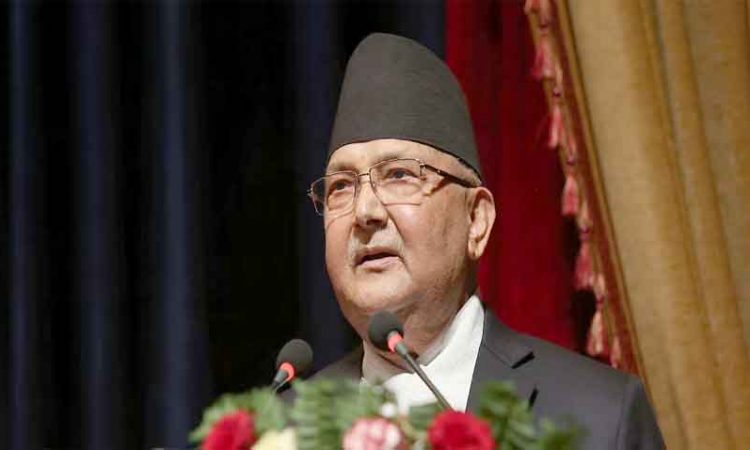 Kathmandu, May 14: K P Sharma Oli was sworn in as Nepal’s Prime Minister on Friday, days after he lost a crucial vote of confidence in Parliament.
President Bidya Devi Bhandari administered the oath of office and secrecy to Oli, 69, as the 43rd prime minister of Nepal at a ceremony at Shital Niwas, the presidential palace.

Oli was appointed as prime minister by the president in his capacity as leader of the largest political party in Nepal’s House of Representatives.
He was reappointed to the post on Thursday night as the Opposition parties failed to secure majority seats in Parliament to form a new government.
Oli, the Chairman of CPN-UML, lost a crucial trust vote in the House of Representatives on Monday.
Oli will now have to take a vote of confidence at the House within 30 days, failing which, an attempt to form a government under Article 76 (5) of the Constitution would be initiated.
The ministers of Oli’s Cabinet were also sworn in during the ceremony.
During the oath-taking ceremony, Prime Minister Oli and Deputy Prime Minister Ishwar Pokharel did not mention the word God though President Bhandari had mentioned it.
I will take oath in the name of the country and the people, Oli said, while President Bhandari had mentioned God, country and the people.
All the ministers and ministers of state from the old Cabinet have been included in the new Cabinet.
Pradeep Gyawali has been reappointed as Foreign Minister while Ram Bahadur Thapa and Bishnu Poudyal were appointed as ministers for Home and Finance. The oath-taking ceremony was kept brief keeping in mind the raging COVID-19 pandemic in the country.
Vice President Nanda Bahadur Pun and Supreme Court Chief Justice Cholendra Shumsher Rana were among the distinguished personalities who attended the ceremony.
There are 22 ministers and three ministers of state in the new Cabinet.
Oli previously served as prime minister from October 11, 2015 to August 3, 2016 and again from February 15, 2018 to May 13, 2021.
Earlier, the president had asked the Opposition parties to come up with the support of majority lawmakers to form a new government by 9 pm on Thursday after Oli lost the vote of confidence in the House on Monday.
Until Thursday, Nepali Congress president Sher Bahadur Deuba, who got backing from CPN-Maoist Centre chairman Pushpakamal Dahal “Prachanda” was hopeful to get sufficient votes in the House to stake his claim as the next Prime Minister.
But as Madhav Kumar Nepal took a U-turn after his last-minute meeting with Oli, Deuba’s dream to become the next Prime Minister was shattered.
The CPN-UML of Prime Minister Oli is the largest party with 121 seats in the 271-member House of Representatives.
At present 136 votes are needed to form a majority government.
If the parties fail to form a new government in line with Article 76 (5) or the Prime Minister elected under this provision does not secure the vote of confidence again, the sitting Prime Minister can recommend the President to dissolve Parliament and announce the date to hold general elections within the next six months.
Nepal plunged into a political crisis on December 20 last year after President Bhandari dissolved the House and announced fresh elections on April 30 and May 10 at the recommendation of Prime Minister Oli, amidst a tussle for power within the ruling Nepal Communist Party (NCP).
Oli’s move to dissolve the House sparked protests from a large section of the NCP led by his rival ‘Prachanda’.

In February, the apex court reinstated the dissolved House, in a setback to Oli who was preparing for snap polls.
As parliamentary politics is rife with number games, Nepal grapples with shortages of medical supplies, mismanagement of the situation by the state, spiking infections and fatalities amid the raging second wave of the pandemic.
The country is currently witnessing more than 9,000 new COVID-19 cases daily.
Nepal’s more than 40 districts, including three districts of Kathmandu Valley, are under prohibitory orders for the past two weeks as the second wave of infection has hit the country. (PTI)