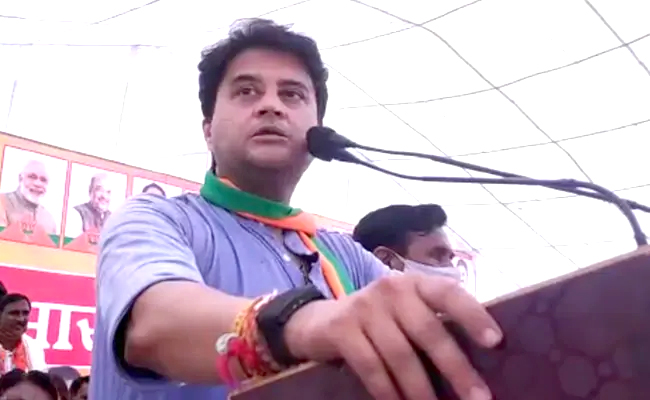 New Delhi, October 28: Jyotiraditya Scindia, who has missed no opportunity of slamming the Congress since joining the BJP, today criticised party chief Sonia Gandhi over her silence on Kamal Nath’s “item” remark that stirred a political row in Madhya Pradesh ahead of the bypolls. Imarti Devi, the woman targeted by Mr Nath, had appealed to Sonia Gandhi for action, questioning if she would have condoned it had the remark been made about her daughter. Chief Minister Shivraj Singh Chouhan had also written to her on the issue.
Asked whether Mrs Gandhi, being a woman, should have pulled up Mr Nath, Mr Scinda said: “Though it is an internal matter (of Congress), I certainly think so. Fifty per cent of the population comprises women, every political party must set a standard”.
Kamal Nath – the former Chief Minister of Madhya Pradesh and Mr Scindia’s bitter rival — had stepped into controversy while campaigning for the party candidate in Dabra, where the BJP is represented by Imarti Devi.
The former minister in Mr Nath’s cabinet, she had switched to the BJP in March along with MLAs loyal to Mr Scindia, pulling down Mr Nath’s government in the process.
During the campaign, Kamal Nath had said the Congress candidate was a “simple person” unlike his opponent who is an “item”. “Why should I take the name (of the opposing candidate)? You all know that person better than me. What an item,” Mr Nath had said.
Mr Scindia said Kamal Nath’s statements about Imarti Devi showed the Congress and its leaders’ mentality towards women, especially if she is a Dalit.
“It speaks about one’s own culture and principles and morals. Kamal Nath has used it against a woman who has risen from the ranks and had been a member of his cabinet. Is this the kind of respect you give to your cabinet colleagues?” the Rajya Sabha MP was quoted as saying by news agency ANI.
“Look at this man’s (Kamal Nath’s) thought process- he says he forgot her name. This is how you respect your cabinet colleague? Why? Because she is a woman from the Dalit community?” he asked.
Last week, Congress’s Rahul Gandhi had expressed disapproval of Mr Nath’s remark. In the backdrop of the intense criticism, the Election Commission had asked Mr Nath to explain his remark.
On Monday, Mr Nath was let off with a warning and the poll body advised him to not use such a language in public during the period of the Model Code of Conduct. (ndtv with inputs from ANI)