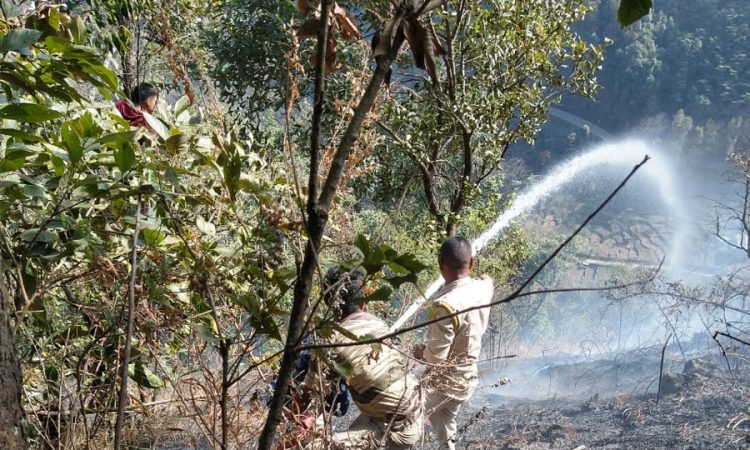 KOHIMA, JANUARY 7: In another wildfire incident, a Jungle fire on a hillock near St. Joseph College, Jakhama village, razed more than 100 acres of land on Thursday.
However, today’s wildfire in the forest is not related to the raging Dzukou fire.

Residents of Jakhama village said that the particular slope that was ravaged is named “Khadihela”, which is part of Mount Chemyo.
Even though the fire at Dzukou Valley is still at large, DDMA officials have confirmed that the jungle fire was not related to Dzukou fire.
According to Kohima Fire Station, a call regarding the fire was first received at 5:17 a.m. and Fire Fighters reached the location at 6 a.m. and it took around 10 hours to bring the fire under control.
There were no casualties but the cause of the fire and estimate of the scale of property damaged are yet to be ascertained.
Meanwhile Advisor to State Chief Minister & Technical Education, Medo Yhokha, along with DC and ADC, Kohima, Jakhama Village Council Chairman; DDMO, NDRF, Fire and Emergency Services personnel and volunteers visited the fire incident site at Jakhama today to take first hand information about the incident and were informed that the fire was not related to Dzükou fire.
(Page News Service)