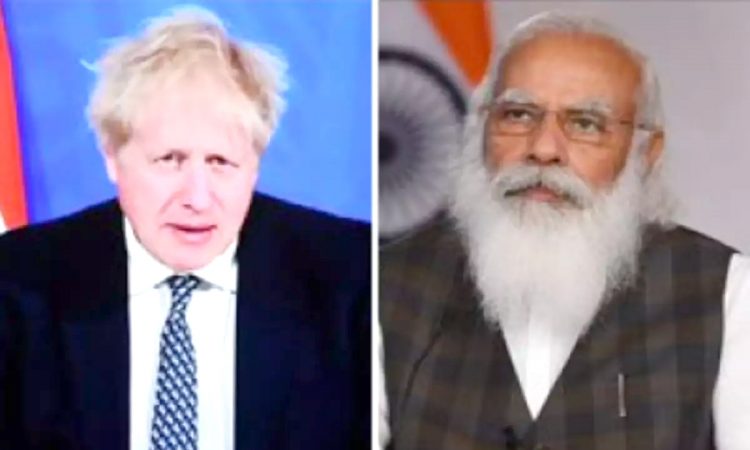 London, May 4: British Prime Minister Boris Johnson on Tuesday declared a new era in UK-India relations following a virtual summit with Prime Minister Narendra Modi, which culminated in the two leaders agreeing on a 2030 Roadmap’ as a framework for strengthening ties across health, climate, trade, education, science and technology, and defence.

Downing Street said the two Prime Ministers have pledged to achieve a “quantum leap” in the UK-India relationship and that India has elevated the status of its relationship with the UK to a Comprehensive Strategic Partnership – the first European country to be granted that status.
An Enhanced Trade Partnership, which had been announced earlier, was reiterated as a starting point to negotiate a Free Trade Agreement (FTA) in future, with an ambition for bilateral trade to be doubled over the next decade.
“The agreements we have made today mark the beginning of a new era in the UK-India relationship,” Johnson said.
“The UK and India share many fundamental values. The UK is one of the oldest democracies, and India is the world’s largest. We are both committed members of the Commonwealth. And there is a living bridge uniting the people of our countries,” he said.
“In the last week the British people have stepped up in their thousands to support our Indian friends during this terrible time in a demonstration of the deep connection between the UK and India. This connection will only grow over the next decade as we do more together to tackle the world’s biggest problems and make life better for our people, Johnson added.
The ‘2030 Roadmap’, to be published in full by the Foreign, Commonwealth and Development Office (FCDO) and agreed between the two sides, includes plans to expand the UK-India health partnership to enhance global health security and pandemic resilience. This includes firming up international supply chains to ensure critical medicines, vaccines and other medical products reach those who need them most.
“Deepening the economic relationship between the UK and India through an Enhanced Trade Partnership and confirming our intent to negotiate a Free Trade Agreement with a view to doubling UK-India trade over the next decade,” notes an official statement from Downing Street.
“Increase cooperation between British and Indian universities on crucial research in areas like health, emerging technologies and climate science. Work in lockstep to tackle threats to our shared security in all their forms. The UK’s Carrier Strike Group will visit India later this year to boost this work with our navies and air forces undertaking joint training exercises to enable future cooperation on operations in the Western Indian Ocean,” it reads.
India and the UK have also agreed to work together to achieve ambitious goals on tackling climate change and preserving nature, including accelerating the development of clean energy and transport, protecting biodiversity and helping developing countries adapt to the impact of climate change.
India is described as an “indispensable partner” in relation to the UK’s Integrated Review, published earlier this year, which highlighted the importance of the Indo-Pacific region to the UK’s security and prosperity.
During their meeting on Tuesday, the two leaders are said to have also undertaken to work closely together in support of shared values, including at next month’s G7 Summit in Cornwall which India will attend as a guest nation.
They agreed to continue to work together in the shared fight against coronavirus and pointed to the Oxford-AstraZeneca vaccine, currently being produced by India’s Serum Institute, as an example of the power of UK-India cooperation, Downing Street said.
Work towards the goals set out in the ‘2030 Roadmap’ will be reviewed annually by the British and Indian foreign ministers, and UK ministers across government will hold regular meetings with their Indian counterparts to make progress on the shared ambitions agreed at the virtual summit.

Johnson was to visit India late last month. But days before the visit, he called it off in view of the coronavirus pandemic in India.(PTI)