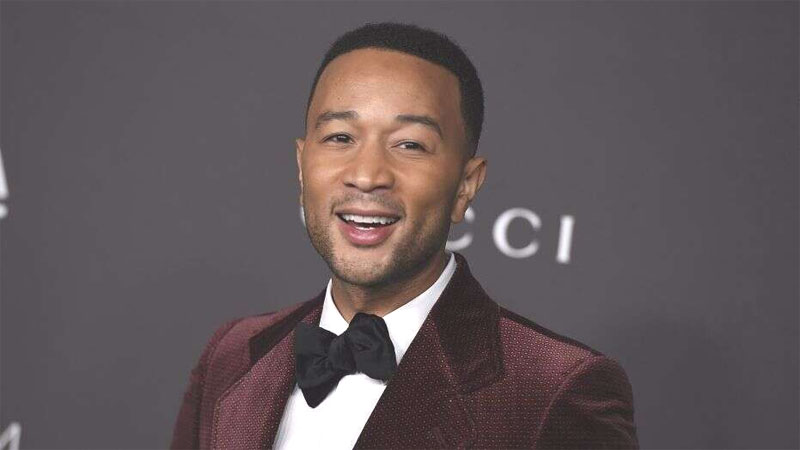 John Legend was revealed as the 2019 People magazine Sexiest Man Alive on Tuesday while serving as a judge on The Voice.
The 40-year-old singer was introduced as the new titleholder by Blake Shelton, 43, who was the 2017 Sexiest Man Alive.
John’s wife Chrissy Teigen, 33, also took to Twitter and shared John’s cover photo on the upcoming November 25 issue along with a racy response to his new title.
She wrote in the caption: ‘my secret is out. I have fulfilled my dream of having boned @people’s sexiest man alive!! an honor!!!!!’.
Blake noted that John joined the NBC singing competition show with an EGOT after previously winning an Emmy, Grammy, Oscar and Tony.
He told John who won The Voice last season that he was now a ‘VEGOTSMA’.
Blake then presented John with tiny denim shorts with VEGOTSMA in glittering letters on the rear.
John thanked People for the honor and Blake for being a mentor.
‘I don’t know what to say,’ John said. ‘I want to thank People magazine, of course, but mostly I want to thank Blake Shelton, because I sat next to him for the last few months and, I learned his sexy ways.’
‘I observed every move he made, every utterance that came from his mouth, and I think some of it rubbed off on me, and I think that has everything to do with why we’re here today,’ he joked.
The Voice host Carson Daly, 46, asked John what his wife Chrissy thought of his new sexy title.
‘She’s proud of me. You know she makes fun of me almost all the time, but she hasn’t even been snarky about this. She’s like legit proud of me. I finally impressed my wife,’ John said.
The 10-time Grammy winner follows English actor Idris Elba, 47, who was named the 2018 Sexiest Man Alive.
He became the third coach on The Voice to win the title following Blake in 2017 and Adam Levine, 40, in 2013.
People magazine first bestowed the title on actor Mel Gibson, 63, in 1985 when he was age 29 and other winners include: Mark Harmon, Tom Cruise, Keanue Reeves, Brad Pitt, George Clooney, Harrison Ford, Ben Affleck, Johnny Depp, Ryan Reynolds, Bradley Cooper, Channing Tatum, Chris Hemsworth, David Beckham and Dwayne Johnson.
John has been married since 2013 to Chrissy and they have a three-year-old daughter Luna and one-year-old son Miles together.
He won season 16 of The Voice in May 2019 with singer Maelyn Jarmon, 26.
John, along with his multiple Grammy Awards, won an Oscar in 2015 for co-writing the song Glory from the film Selma and scored a Tony Award for his co-producer work on Jitney. He earned an Emmy as a producer on NBC’s live version of Jesus Christ Superstar, a project in which he also played the role of Jesus.