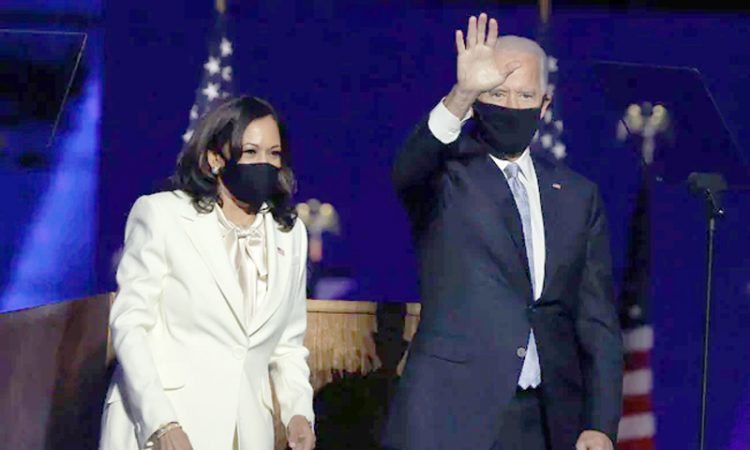 Washington, November 8: Pledging to be the president of all Americans, Joe Biden has sought an immediate end to the “grim era of demonisation” in the deeply-polarised nation, as he and Vice President-elect Kamala Harris celebrated their historic triumph over Donald Trump in a bitter and closely-fought presidential election.
“I pledge to be a president who seeks not to divide, but to unify; who doesn’t see red states and blue states, only sees the United States,” Biden, 77, said in his victory speech before a drive-in audience in his hometown, Wilmington, Delaware on Saturday night, nearly ending the uncertainty over the outcome of Tuesday’s election.

Biden, who has succeeded in his third bid to the White House, thanked his supporters, saying he had earned votes from the “broadest and most diverse coalition in American history.”
“I am humbled by the trust and confidence you’ve placed in me,” who will be the oldest US president when he would be sworn-in on January 20, 2021, said amid applause and cheers from the audience.
“The people of this nation have spoken, they’ve delivered us a clear victory, a convincing victory, a victory for We the People’,” he said, referring to more than 74 million voters who backed him. Biden ran twice unsuccessfully for president – in 1988 and 2008.
Noting that he ran as a proud Democrat, Biden said that he will now be an American president. I will work as hard for those who didn’t vote for me – as those who did.
Biden criticised Trump without naming him in his nearly 15-minute address, saying that he wanted to end “this grim era of demonisation in America here and now.”
“Let this grim era of demonisation in America begin to end – here and now. The refusal of Democrats and Republicans to cooperate with one another is not due to some mysterious force beyond our control, he said.
Trump has so far refused to concede the election that attracted a record number of Americans to cast their votes amidst the COVID-19 pandemic.
He has announced filing multiple lawsuits against the election results in key battleground states like Pennsylvania, where Biden was born and gave him the crucial 20 electoral votes to cross the magic figure of 270 he needed to win.
He also reached out to Trump voters, saying he would act as their president as much as he would for those who voted for him.
“I understand your disappointment tonight. I’ve lost a couple times myself. But now, let’s give each other a chance,” Biden said, adding that, “This is the time to heal in America.”
He struck a familiar chord in his speech, calling for unity and implicitly rebuking president Trump for his divisive politics.
“I sought this office to restore the soul of America, to rebuild the backbone of this nation, the middle class and to make America respected around the world again, and to unite us here at home,” the President-elect said.
In her address, Harris, who scripted history as she broke the glass ceiling in the world’s oldest democracy to be elected America’s first Black and Indian-orign woman Vice President, said, “You chose hope, and unity, decency, science and yes truth.”
“You chose Joe Biden as the next president of the United States,” said the Vice President-elect, drawing applause and honks from the supporters.
“Joe’s a healer,” she said. “A person whose own experience of loss gives him a sense of purpose that will help us as a nation reclaim our own sense of purpose.”
“You ushered in a new day for America,” the 56-year-old Senator from California, said before introducing Biden.
The 2020 US election has been billed as one of the most divisive in recent American history.
“We are not enemies. We are Americans, Biden said.
The mandate of this election, he said, is that Americans have called on them to marshal the forces of decency and the forces of fairness. To marshal the forces of science and the forces of hope in the great battles of this time.
The battle to control the virus. The battle to build prosperity. The battle to secure your family’s health care.
“The battle to achieve racial justice and root out systemic racism in this country.The battle to save the climate. The battle to restore decency, defend democracy, and give everybody in this country a fair shot, he said.
Observing that he has long talked about the battle for the soul of America, Biden sought to restore it.
“Our nation is shaped by the constant battle between our better angels and our darkest impulses. It is time for our better angels to prevail, he said.
Asserting that the whole world is watching America, Biden said he believes at best America is a “beacon for the globe.”

Biden assured Americans that his first task as President-elect is to get the coronavirus pandemic under control with a definite plan.
The COVID-19 pandemic has killed more than 237,000 Americans and infected over 9 million others. The pandemic was a major topic of debate during the campaign. Biden has repeatedly attacked Trump’s response to the pandemic.
“On Monday, I will name a group of leading scientists and experts as transition advisers to help take the Biden-Harris Covid plan and convert it into an action blueprint that will start on January 20, 2021,” Biden said. “That plan will be built on bedrock science,” he added.
“I will spare no effort” to turn the COVID-19 pandemic around, he added.
Biden and Vice President-elect Kamala Harris were joined on stage following their speeches by their families.
Biden kissed his grandchildren and hugged his family as fireworks exploded overhead. A series of drones also flew overhead and made the shape of the US and “BIDEN.”
Earlier, major news networks declared Biden as the winner of the November 3 presidential election after he crossed the threshold of 270 electoral college votes needed to secure victory.
The news of Biden’s win led to celebrations in major cities across the US, including outside the White House in Washington DC. (PTI)