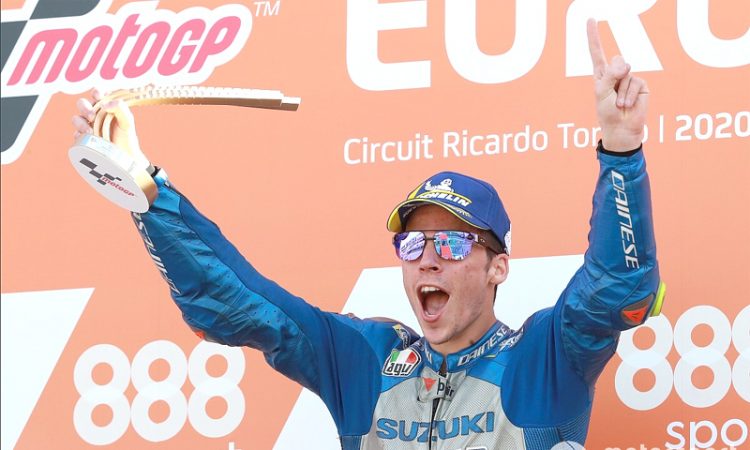 CHESTE (Spain), November 15: Joan Mir won the MotoGP title for the first time with a seventh-place finish at the Valencia Grand Prix on Sunday.
Pole-sitter Franco Morbidelli won the race for this third victory of the season, but it was not enough to keep Mir from securing the title with one race to go. The season-finale will take place in Portugal next week.
The 23-year-old Spanish rider with Suzuki started from 12th place on the grid and needed nothing more than a top-three finish to clinch the title. He also could have lifted the trophy by finishing ahead of the other contenders.
He won his first MotoGP race last weekend at the same Ricardo Tormo circuit near Valencia and earned seven podium finishes in 13 races.
Mir entered Sunday’s race with a 37-point advantage over both Suzuki teammate Álex Rins and Fabio Quartararo of Yamaha. Morbidelli, Maverick Viñales and Andrea Dovizioso also had a mathematical chance to win the title.
This year’s title race was wide open after six-time champion Marc Márquez was sidelined because of an injury. There have been nine different winners this season, with five first-time winners.
The MotoGP season was shortened and had its calendar severely altered because of the coronavirus pandemic.
Mir moved up a place at the start on Sunday and gradually moved to the front. Quartararo, a three-time winner this year who started 11th on the grid, went wide early and dropped to the back of the pack, then crashed out of the race with less than 20 laps to go.
Johann Zarco, who started fourth on the grid, crashed early in the race. (AP)