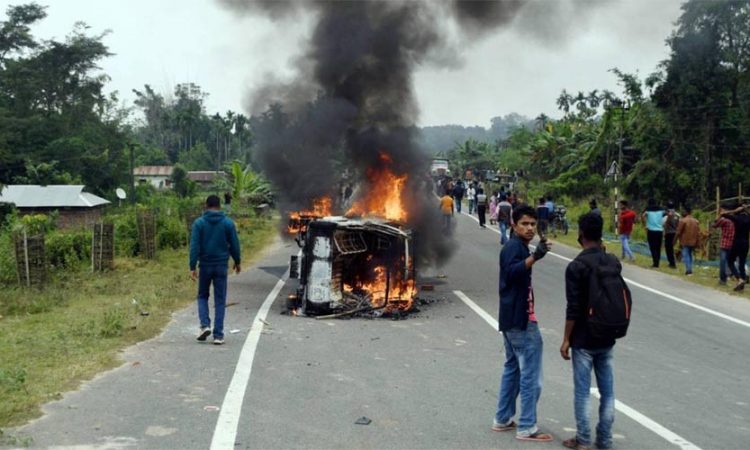 A vehicle in flames during a protest by the Joint Movement Committee (JMC) against the resettlement of displaced Bru migrants in Kanchanpur sub-division, at Panisagar in North Tripura district (PTI Photo)

Agartala, November 24: Joint Movement Committee (JMC), which had called an indefinite strike at Kanchanpur in North Tripura district and blocked a national highway against the proposed resettlement of 6,000 Brus in the sub-division, “temporarily” called off the protest on Tuesday after assurances from the government on considering their demands.

Sushanta Baruah, convener of the JMC, a forum of Bengalis and Mizos, said, they were assured at a meeting with elected public representatives and government officials on Monday that their demands would be considered positively.
The strike was called off three days after a clash erupted between protestors and security personnel at Panisagar in Kanchanpur sub-division which left two dead and 23 injured.
“We have demanded Rs 20 lakh compensation for our supporter killed in police firing, a government job to his next of kin as per the qualification, treatment for those injured in the clash and a financial package for repair of damaged vehicles and property in the incident.
“As the government has assured us to consider our demands positively, we have, therefore, decided to temporarily call off the strike,” Baruah said.
Local MLA Bhagaban Das, who initiated the dialogue with the JMC said, talks were held in two phases and were fruitful.
“The discussion has concluded that both sides will have to sacrifice something and the indefinite strike was withdrawn today”, the legislator said.
The JMC had called the indefinite strike on November 16 to protest against the state government’s plan to settle 6,000 Brus in Kanchanpur sub-division. The government had earmarked 12 places in six districts to rehabilitate 35,000 Brus of Mizoram.
Meanwhile, many social organisations and tribal civil bodies had criticised the indefinite strike called by the JMC and the clash between protestors and police.
Tripura Kshatriya Samaj, Bru Motha, Jamatia Hoda, Noatia Hoda, Bru Socio-Cultural Organization, Tripura Chubalal Buthu have blamed the state government for failure in effectively handling the Bru resettlement issue.
“There was no presence of administration at Kanchanpur for a week. Rule of law had withered away as health, public distribution and other essential government services had collapsed there. The government failed to take proper steps in time”, tribal leaders told reporters in a press conference here.
Tripuras ruling ally, the Indigenous Peoples Front of Tripura (IPFT), has also come out in protest against the incident.
IPFT spokesperson Mangal Debbarma has demanded punishment for JMC leaders and Rs 20 lakh compensation for all the deceased.
State Congress president Pijush Kanti Biswas has expressed shock at the “failure” of the state government in containing the movement and the decision to open fire at protesters.
Opposition CPI(M) has criticised the firing on agitators, and demanded that resettlement be carried out without hurting the interests of local residents.
43-year-old Srikanta Das, who was among the protesters, was killed and at least 23 others were injured when police opened fire at picketers, who had blocked the Assam-Agartala National Highway at Panisagar.
Biswajit Debbarma, a fire service personnel, who was injured by the protesters and admitted at GBP Hospital with polytrauma and head injuries died early Sunday. (PTI)