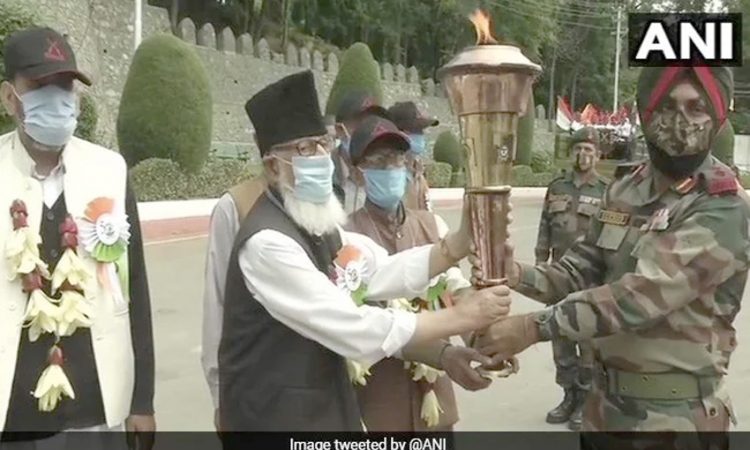 Srinagar, June 20: As part of celebrations of 50 years of India’s triumph over Pakistan in 1971 war, soldiers and war veterans at Jammu and Kashmir Light Infantry (JKLI) Regimental Centre in Srinagar on Sunday received the Victory Flame.

In commemoration of the event, Army Bands put up a spectacular performance of martial music, which was followed by a Guard of Honour to the Victory Flame, felicitation of veterans and Veer Naris. A wreath laying ceremony was also held for tribute to the martyrs of JKLI regiment.
“As you all know we celebrate December 16 as Vijay Diwas commemorating the Kargil war. This year we decided to celebrate 50 years of 1971 war as ”Swarnim Vijay Varsh” today. The ”Victory Flame” has been brought to JKLI Regimental Centre today. This was welcomed by war veterans and decorated serving soldiers,” said Brgt S Seth, Commandent JKLI Centre, Rangrath.
“Our regiment got three Battle Honour and 28 Gallantry Awards. I am glad that as a soldier, we got to hounour the 1971 war heroes and veer naris. I reassure them that their martyrdom and valour will never be forgotton,” he added.
Mohammed Mundar Sheikh, a war veteran, got emotional while speaking about how he, along with other Indian Army soldiers, helped wounded Pakistani soldiers after capturing their positions in 1971 Indo-Pak war.
“We defeated Pakistan in 1971. We crossed Jammu Tawi. We attacked around 7:30 at night. They fled their post. We tended to the wounded Pakistani soldiers at the captured post. We are not a country that takes revenge unethically. We are always ready to face enemies to safeguard our nation,” he said.

“Today I have come here. I am glad. 50 years have passed by. I am grateful for this comemoration ceremony,” he added.
Another war veteran said: “I was a platoon commander during the war. I feel honoured to be here.” (PTI)