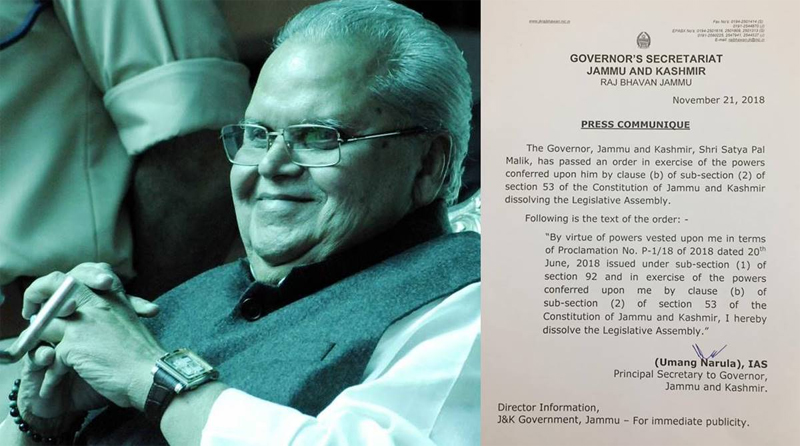 Jammu, November 21: In a day of swift political developments, Governor Satyapal Malik dissolved the Jammu and Kashmir Assembly on Wednesday evening, shortly after PDP leader and former chief minister Mehbooba Mufti faxed a letter to him staking claim to form government in the state with support of the Congress and tje National Conference.
Mehbooba Mufti wrote a letter to the Governor claiming support of 56 MLAs in the 87-member Assembly.
“The Governor while exercising powers conferred upon him by clause (b) of sub-section (2) of section 53 of the Constitution of Jammu and Kashmir dissolved the Legislative Assembly,” said a press communiqué issued by Umang Narula, Principal Secretary to the Governor.
Highly placed sources said dissolution of Assembly had been ordered following hectic consultations with the Ministry of Home Affairs at the Centre and others.
The state has been under the Governor’s rule since 19 June when the PDP-BJP coalition government fell as the latter withdrew support to the Mehbooba Mufti-led alliance regime. The then Governor NN Vohra, while imposing Governor’s rule, did not dissolve the Assembly. Malik had recently said the Assembly would not be dissolved.
Dissolution of the Assembly however appeared on the cards when the BJP started making attempts earlier during the day to block the three parties from coming to power.
Shortly after the PDP, Congress and NC formalised an alliance to stake claim to form government in Jammu and Kashmir, and Mufti sent the letter, Peoples Conference leader Sajad Lone, with support from the BJP, too reportedly wrote to Governor Malik countering the move.
Lone claimed support of 18 MLAs besides the 25-strong BJP, asserting that it was more than the required number for majority.
In her letter, Mehbooba wrote: “As you are aware that the PDP is the largest party in the state assembly having strength of 29… NC has strength of 15 and the Congress 12. That takes our collective strength to 56.”
“You might have gathered from the media reports that the Congress and NC have also decided to extend support to our party to form a government in the state,” Mehbooba said in the letter that she faxed from Srinagar after hectic parleys between leaders of the three parties.
She added: “Since I am presently in Srinagar, it would not be possible for me to call on you immediately and this is to keep you informed that we would be seeking your convenience shortly to stake claim for forming the government in the state.”
Until the news of dissolution came, former minister Altaf Bukhari of the PDP was tipped to be the next CM of the PDP-led collation.
Speaking to the media earlier int he day, he had said the people of Jammu and Kashmir would soon get “good news” regarding government formation in the state.
The NC, Congress and PDP have decided to stage protests against the Governor’s sudden decision to dissolve the Assembly. Calling the decision “undemocratic”, these parties have decided to stage protests throughout the state.(Agencies)