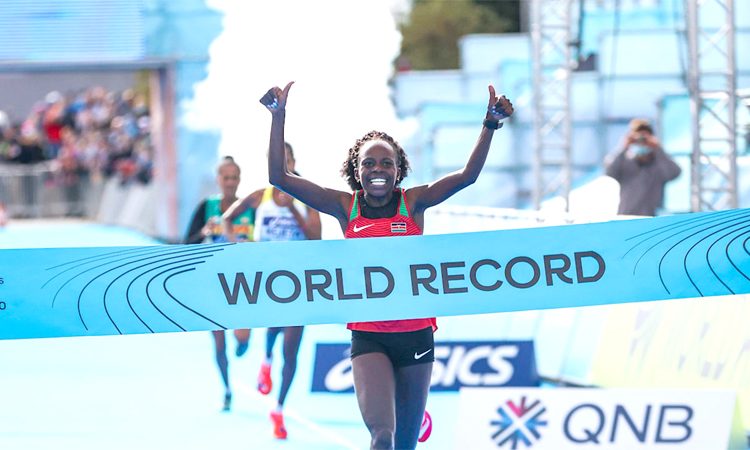 Peres Jepchirchir of Kenya crosses the finish line to win the Women's Final Run during the World Athletics Half Marathon Championships on Saturday.

GDYNIA (Poland), October 17: Kenyan Peres Jepchirchir lowered her own world record for an all-women’s half marathon at the world championships in Gdynia on Saturday. The 27-year-old, who also won world half marathon gold in 2016, produced a final sprint to take the title in 1hr 05min 16sec.
That bettered the previous best set by Jepchirchir herself in Prague on September 5 of 1hr 05min 34sec.
She came home just two seconds clear of Germany’s Melat Yisak Kejeta, who smashed the European women-only record to take silver in 1hr 05min 18secs, with Ethiopia’s Yalemzerf Yehualaw a further second behind.
On a cold and windy morning, a group of favourites broke away early during the four-lap race but three of them suffered falls to disappear from contention.
Defending champion Netsanet Gudeta’s race almost came to an abrupt stop as the leaders took a 90-degree turn on to the seafront, the defending champion taking a fall and losing several seconds to the leaders.
It was a gap she would never close, the Ethiopian slipping farther behind during the third lap.
Turkey’s Yasemin Can led a group of seven through 10km in 30mins 47sec after which Jepchirchir began to take control.
The Ethiopian Ababel Yeshaneh, world record holder in a mixed race (1hr 04min 31sec), then tangled with Joyciline Jepkosgei and both crashed to the ground, leaving Jepchirchir, Kejeta and Yehualaw to battle it out in the final sprint. (AFP)