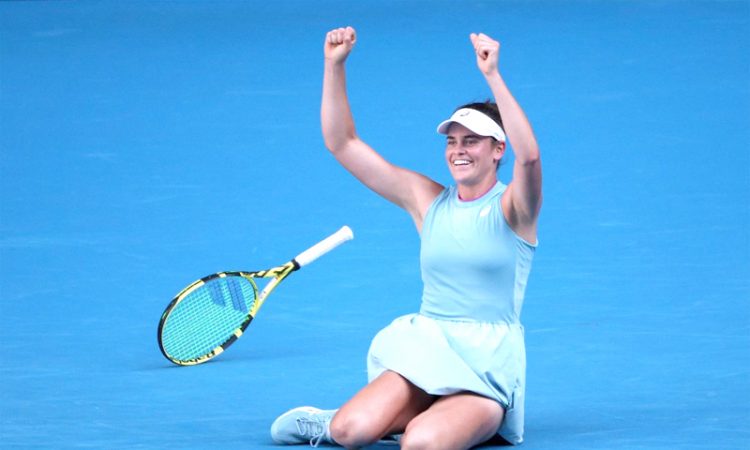 America's Jennifer Brady celebrates on winning her semi-final match against Czech Republic's Karolina Muchova at the Australian Open on Thursday.

MELBOURNE, February 18: Jennifer Brady ensured there would be an American in the Australian Open final after Serena Williams’s exit by downing Karolina Muchova 6-4, 3-6, 6-4 in the semi-finals on Thursday.

On a stifling afternoon at Rod Laver Arena, former college player Brady dug herself out of a mid-match hole to reach her first Grand Slam decider and a daunting title clash with Naomi Osaka, the woman who knocked her out of the US Open semis.
The 2019 champion Osaka earlier eliminated Williams in straight sets, but 22nd seed Brady ensured the United States would have another finalist a year after Sofia Kenin upset Garbine Muguruza for the 2020 trophy.
Brady saw four match points slip through her fingers as she served it out nervously but finally celebrated the win when Muchova fired a forehand long.
Brady slumped onto the court as a capped crowd cheered, and she was still overcome with the moment in her on-court interview.
“I can’t feel my legs. My legs are shaking, my heart is racing. I am so nervous,” the 25-year-old said. “I came out a little strange today, super excited but at the same time I was pretty flat footed.
“My legs felt fresh but at the same time they just weren’t moving. I felt like I was stuck in mud so I didn’t really pick up my intensity until the beginning of the third set.”
Brady’s achievement is all the more remarkable after having been one of the 72 players who spent two weeks in hard quarantine and were unable to train like the rest of the field.
It was a madcap finish as Brady’s serve went to the dogs in the final game.
Muchova saved match points bravely but also had three chances to break Brady’s serve go begging.
Finally, on the 18th point of the game, Muchova stumbled with a miscued forehand to hand an elated Brady a shot at her first Grand Slam title.
“I’m obviously pretty excited to be in the finals here the Australian Open, it’s an incredible achievement,” said Brady. “I think it’ll be a really tough match. Obviously she’s won a few Grand Slams.” (Reuters)