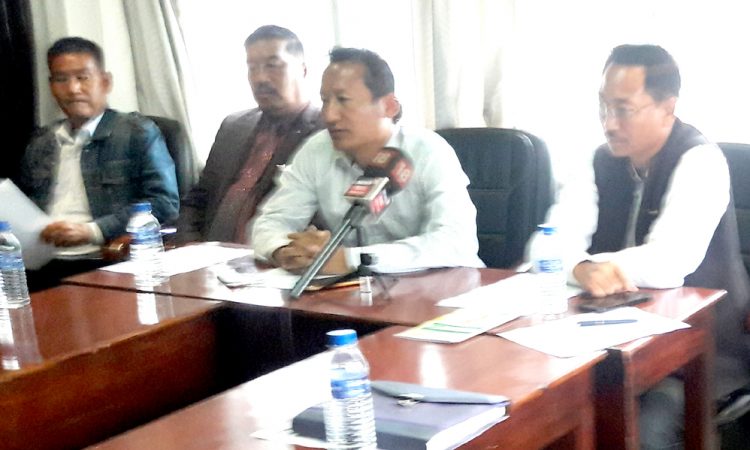 Kohima, July 3: With a view to press the negotiating parties of the decades old Indo-Naga political problem for an early solution, the JD (U) Nagaland has decided to stage a dharna in Delhi on July 9 next.
Announcing this at a press conference at Ura Hotel, State JD(U) president Senchumo (NSN) Lotha said that the dharna would be staged at the party’s head office at 7 Jantar Mantar Road, New Delhi from 11:30 am.
Lotha recalled that the Naga movement vis-à-vis the honourable and acceptable solution to the Indo-Naga political issue remains closely associated with the Janata party since its inception through the founding father Jaya Prakash Narayan who along with Bimala Prasad Chaliah and Rev Dr Michael Scot as members of the ‘peace mission’ formed under ceasefire agreement in 1964 has recognized the “Nagas right to self-determination” and recommended that the Nagas could ‘on their own volition, decide to be a participant in the union of India and mutually settle the terms and conditions for the purpose’.
He said the dharna is part of the fulfillment of the party’s commitment made through the manifesto during the February State Assembly Election. He also informed that JD(U) National president Nitish Kumar is very desirous and committed to the issue while the idea of the dharna was his suggestion.
On the proposed National Citizenship Bill 2016, Lotha said that the State Unit in line with stand of National JD(U) against the bill. JD(U) has always been concerned for the North Eastern people and in no way it will allow victimization of the people of the region, they said. (Page News Service)