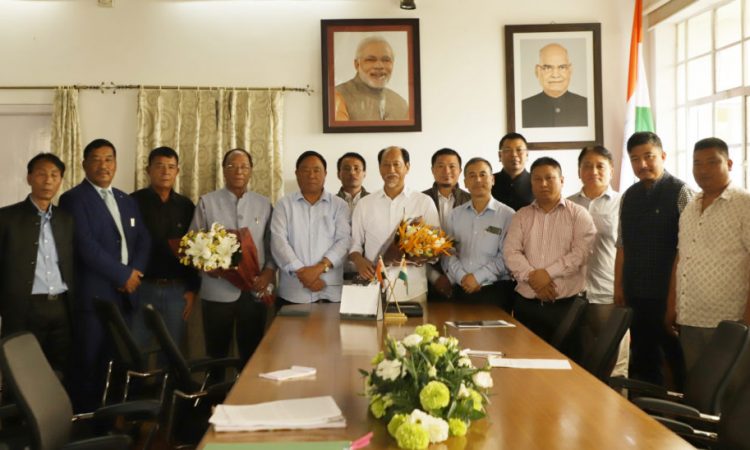 Kohima, June 24: History repeated again as the lone Janata Dal (United) lawmaker joined the Nationalist Democratic Progressive Party (NDPP) on Monday.
Minister for Agriculture and Cooperation, G. Kaito Aye along with his supporters and some ex-candidates of the 2018 State Assembly elections merged with the NDPP.
The NDPP, however, said it was a merger of the JD-U Nagaland Unit under the leadership of G Kaito Aye, along with State executive members, office bearers and former candidates. The party welcomed the “official merger.”
“The members of the JD (U) led by Hon’ble Minister Mr. Kaito decided to officially merge with the NDPP in order to strengthen the PDA Government in Nagaland and also further uphold and expedite the ongoing framework agreement,” the NDPP said in a press release.
The JD-U was in the PDA before the merger. How the JD-U merger with the NDPP will strengthen the PDA Government, as the NDPP claims, is beyond comprehension. But it will definitely strengthen the NDPP and Chief Minister Neiphiu Rio’s hand as its tally in the 60-member assembly has risen by one more.
The strength of NDPP in the State Assembly has gone up to 21, its alliance BJP has 12 members and an Independent, while the Opposition NPF has 26 MLAs. The NDPP is also supported by seven rebel NPF legislators.
Two National People’s Party (NPP) lawmakers have already joined the NDPP.
Confirming the news, Chairman of North East Executive Council of JDU and also the Convenor of Nagaland unit of the party, Senchumo NSN Lotha said that the party is aware of its legislator joining the ruling NDPP.
Nonetheless, he said that the party would respond to the development only after in-depth consideration.
Sources said Kaito joining the NDPP was on expected line, as NDPP is trying to increase its tally in the Assembly so that the PDA Government is not run at the mercy of other political parties.
Sources said the decision of Kaito to join NDPP was taken a week back but he formally joined today.
Kaito has been a close associate of Rio. He was projected as CM candidate by Rio during 2014-15 political crisis in the State, allegedly engineered by the latter. Despite effort to unseat former Chief Minister, T R Zeliang, they failed.
Just before the last State general election, Kaito left Naga People’s Front (NPF) and joined the JD (U).
He was also Home Minister for a brief period.
With the merger of the JD (U) with the party, the NDPP expressed confidence that all confusions and rumours brought out by political rivals will be put to rest “since the PDA Government in Nagaland is here for the long haul and will grow from strength to strength.”
Assuring to continue to provide the people with stability and good governance as it looks forward to working hand in hand with the newly installed Government in Delhi, the NDPP requested the support of the people of Nagaland in all its endeavours in bringing development for the people. (Page News Service)